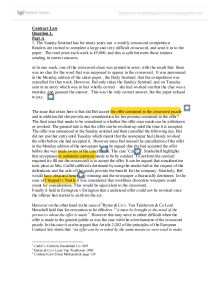 Contract Law Question 1. Part A 1. The Sunday Sentinel has for many years run a weekly crossword competition Readers are invited to complete a large and very difficult crossword, and send it in to the paper. The total prize each week is �5,000, and this is split between those readers sending in correct answers. a) In one week, one of the crossword clues was printed in error, with the result that there was no clue for the word that was supposed to appear in the crossword. It was announced in the Monday edition of the sister paper , the Daily Sentinel, that the competition was cancelled for that week. However, Bel only takes the Sunday Sentinel, and on Tuesday sent in an entry which was in fact wholly correct - she had worked out that the clue was a mistake, and guessed the answer. This was the only correct answer, but the paper refused to pay. The issue that arises here is that did Bel accept the offer contained in the crossword puzzle and in addition did she provide any consideration for her promise contained in the offer? The final issue that needs to be considered is whether the offer once made can be withdrawn or revoked. ...read more.

Finally the defendants in the case of 5Henthorn v. Fraser maintained tat they were not bound to sell the property to the plaintiff because they validly withdrew their offer before it was accepted. Based on this the newspaper company can claim that they had withdrawn the offer (Monday) before they received acceptance (on Tuesday) and since the general rule is that acceptance takes place upon posting of the acceptance as can be seen in the case of 6Entores Ltd v. Miles Far East Corporation Bel can not be entitled to the reward money. Part B. b) In another week, Molly has the bright idea of getting her friends Nel and Olly to photocopy her completed entry and send it in to the Sunday Sentinel. Molly's entry is a correct answer, but the paper's editor refuses to give Nel and Olly a share of the prize, despite the fact that photocopied entries are not expressly excluded by the rules. It may be argued that it is up to the offeror to state any particular terms or conditions of the offer and more importantly whether the acceptance must be in a particular form i.e. Fax etc. However it is then up to the offeree to perform the act in its entirety. ...read more.

Balfour, Warrington LJ states that "these two people never intended to make a bargain which could be enforced by law" In addition to this Atkin LJ held that Mrs. Balfour had not "supplied consideration for her husbands promise since the parties were still husband and wife at the time of the agreement and had not separated at the time of the agreement. Therefore since Des and Ellie were still husband and wife when they entered the crossword there was no intention to make a legally binding contract between both of them. However if Ellie had been living with Roy at the time of the agreement then according to 10Merritt v Merritt (1970) the contract would have been enforceable. In conclusion, according to the case of Simpkins V. Pays Des owes Ellie half the winnings. Further Professor Freeman argues that Balfour v Balfour is a case that represents Victorian family values and that the opinion of Des to refuse Ellie the money is not one of a reasonable mans. . 1 Carlill v Carbolic Smokeball Co 1893 2 Byrne & Co v Leon Van Tienhoven 1880 3 Contract Law Ewan McKendrick page 129 4 Shuey v United States1875 5 Henthorn v Fraser 1892 6 Entores Ltd v Miles Far East Corporation 7 Errington v Errington and Woods 1952 8 Simpkins v Pays 1955 9 Balfour v Balfour 1919 10 Merrit t v Merritt 1970 ?? ?? ?? ?? ...read more.

The grammar and overall structuring of the essay (see, e.g. paragraph 1 of part (a)) could be improved. Part (c), in particular, appears rushed and is quite muddled. Also the author does not get beyond the very basic case law and would benefit by using more appropriate and recent cases. 3 stars.