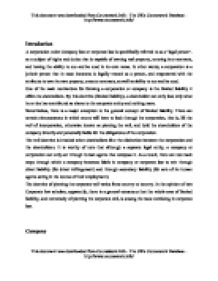 Coporate Law and Limited Liability. There are certain circumstances in which courts will have to look through the corporation, that is, lift the veil of incorporation, otherwise known as piercing the veil, and hold the shareholders of the company directly

Introduction A corporation under Company law or corporate law is specifically referred to as a "legal person"- as a subject of rights and duties that is capable of owning real property, entering into contracts, and having the ability to sue and be sued in its own name. In other words, a corporation is a juristic person that in most instances is legally treated as a person, and empowered with the attributes to own its own property, execute contracts, as well as ability to sue and be sued. One of the main motivations for forming a corporation or company is the limited liability it offers its shareholders. By this doctrine (limited liability), a shareholder can only lose only what he or she has contributed as shares to the corporate entity and nothing more. Nevertheless, there is a major exception to the general concept of limited liability. There are certain circumstances in which courts will have to look through the corporation, that is, lift the veil of incorporation, otherwise known as piercing the veil, and hold the shareholders of the company directly and personally liable for the obligations of the corporation. The veil doctrine is invoked when shareholders blur the distinction between the corporation and the shareholders. It is worthy of note that although a separate legal entity, a company or corporation can only act through human agents that compose it. As a result, there are two main ways through which a company becomes liable in company or corporate law to wit: through direct liability (for direct infringement) and through secondary liability (for acts of its human agents acting in the course of their employment). The doctrine of piercing the corporate veil varies from country to country. ...read more.

These separate legal identities are protected by the veil of incorporation, which can only be disregarded by the courts in particular circumstances. A company once incorporated becomes a legal personality, separate and distinct from its members and shareholders and capable of having its own rights, duties and obligation and can sue or be sued in its own name. This is commonly referred to as the principle of corporate personality and it carries with it the concept of limited liability. No case illustrated the above principles better than the noted House of Lords decision in Salomon v. Salomon & Co Ltd [1897]. However, in some circumstances, the courts have intervened to disregard or ignore the principle of corporate personality and limited liability. Thus, if a corporation gets sued, only assets of the corporation can be collected to a judgment. If the corporation is insolvent, its debts may go unsatisfied, and creditors are out of luck. They can't go after the assets of those who own the company. It is this separate legal personality that makes companies an attractive vehicle for commercial ventures, as the liability rests with the company, rather than the shareholders, directors, members or company officers. The separate legal entity forms the basis for limited liability of shareholders. Shareholders' liability is limited to the value of the shares allotted to them. This separate legal personality has the consequence that a company has perpetual succession. Its legal existence survives its shareholders and directors. Its existence is ended when it is wound up pursuant to the Companies Acts. Example 1: Salomon v Salomon and Co [1897] Salomon (S) ...read more.

While banks and similar financial creditors easily overcome such risks, the same cannot be said of trade creditors, employees and tort creditors. Because trade creditors rarely insist on security before they supply goods on credit, they bear a considerable part of the risk of corporate insolvency. Employees are in an even more precarious position. In stark contrast to finance and trade creditors, employees have no opportunity to obtain security or diversify the risk of their corporate employer's insolvency. Moreover, the majority of employees have minimal information about their employer's financial standing. While contract creditors bear a degree of risk when they deal with a limited liability company, they at least enter into the contract by their own will. This is not so for a company's tort creditors. Victims of torts committed by a company bear an uncompensated risk in case of the company's insolvency. Conclusion The act of piercing the corporate veil until now remains one of the most controversial subjects in corporate law, and it would continue to remain so, even for the years to come. By and large, as discussed in the essay, the doctrine of piercing the corporate veil remains only an exceptional act orchestrated by courts of law. Courts are most prepared to respect the rule of corporate personality, that a company is a separate legal entity from it's shareholders, having it' own rights and duties, and can sue and be sued in it's own name. As we move from jurisdiction to jurisdiction across the globe, it's application narrows down to how that system of the law appreciates the subject. Common law jurisdictions are examples par excellence where the piercing of the corporate veil has gained notoriety, and as the various cases indicate, courts under this system of the law generally appreciates every case by it's merits. ...read more.