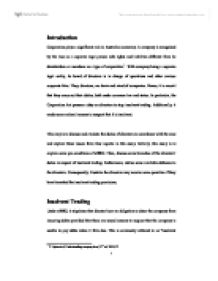 Introduction Corporation plays a significant role in Australian economy. A company is recognised by the laws as a separate legal person with rights and liabilities different from its shareholders or members as a type of corporation.1 With company being a separate legal entity, its board of directors is in charge of operations and other various corporate fairs. They, directors, are brain and mind of companies. Hence, it is crucial that they carry out their duties, both under common law and statue. In particular, the Corporation Act presses a duty on directors to stop insolvent trading. Additionally, it needs some rational reasons to suspect that it is insolvent. This easy is to discuss and evaluate the duties of directors in accordance with the case and explore these issues from four aspects in this essay. Initially, this essay is to explain some pre-conditions of s588G. Then, discuss some breaches of the directors' duties in respect of insolvent trading. Furthermore, advise some available defences to the directors. Consequently, illustrate the directors may receive some penalties if they have breached the insolvent trading provisions. Insolvent Trading Under s588G, it stipulates that director bear an obligation to deter the company from incurring debts provided that there are sound reasons to suspect that the company is unable to pay debts when it falls due. This is commonly referred to as "insolvent trading".2 In another word, this statutory duty requires the directors to utilize their management expertise and knowledge to direct and supervise the company's financial performance to avoid financial difficulties or incurring debts. ...read more.

Applying this s588G (2) (a) to the case of Melbourne Pty Ltd, William has already known other non-executive directors have reasonable grounds to suspect the company was insolvent when debts incurred. Therefore, it can prove that William is failure to stop incurring of debt. In other words, William breaches the duty to prevent insolvent trading. Available defences to the directors In brief, s588H outlines available defences for directors who despite appropriately carrying out their managed duties were incapable to discourage the debts that caused the company's insolvency.18 S588H (2): Reason grounds to expect company solvent19 Under s588H (2), the defence of rational grounds to expect solvency implies more than prospect or probability that company will have solvency. It requires that the directors have rational reasons for being confident that the company is solvent.20 Moreover, the directors do not construct the s588H (2) defence by exhibiting that they did not absolutely know the company's financial performance. In explaining one of the defences available to directors who would otherwise have breached s588G, Austin J pointed out in Tourprint International Pty Ltd v Bott[1999] NSWSC 58121that Bott did not have rational grounds to expect that the company was solvent while debts were incurred because Bott did not learn about the accurate financial performance about the company either before being a director or when a director and he did not enquire the accountant or other directors and did not review the company's financial statement.22 However, when Susan and Sarah asked about the company's financial statement, Will always stated that the company's financial position was solid and he spread to other directors a favorable summary report. ...read more.

has be applied. Therefore, William did not have criminal penalty. Civil penalty The s1317E (1) states the directors may receive civil penalty when contravene the duty to prevent insolvent trading. In particular, there are three categories of civil penalty orders to punish people. Firstly, a pecuniary penalty which more than $200,000 for breaches of the corporation civil penalty provisions: s1317G (1). Specifically, the financial services civil penalty provisions are $1 million for corporation bodies and $200,000 for individual. Therefore, the board of the Melbourne Pty Ltd may be involved in $1 million penalty and William, Susan and Sarah may receive $200,000 penalty. Secondly, the directors get a civil penalty that recusal from management under s206 C. William, Susan and Sarah did not fulfill their obligations as the directors of company, then they may be removed to management of the company. Finally, the court may order the director to pay compensation for damage which unsecured directors suffered in accordance with s1317H. William, Susan and Sarah may pay compensation to directors in order to make up the creditors' damage. Besides, William should pay more than other directors. 35 Conclusion By discussing the Melbourne Pty Ltd, no matter who is managing director or non-executive director, they have the duty to prevent the insolvent trading. They should utilize their managing knowledge and experience to guide and monitor the management of the company. For instance, William should be honest and try his best to manage the company as a managing director. Besides, Susan and Sarah should involve in the running of the company and they ought to play a significant role in supervising the company's financial performance in order to avoid the insolvent trading. ...read more.