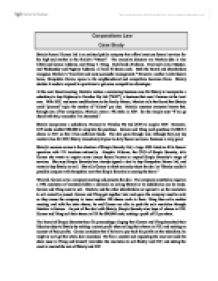 Corporations Law Case Study Stately Funeral Homes Ltd is an unlisted public company that offers luxurious funeral services for the high-end market in the family's "Manor". The executive directors are Morticia (she is also CEO) and Gomez Addams, and Thing T. Thing. Each holds 20 shares. Fred and Lillian Munster, and Wednesday and Pugsley Addams, all hold 10 shares each. Both the Board and shareholders recognise Morticia's "excellent and most successful management." However, another lavish funeral home, Hampshire Haven, opens in the neighbourhood and competition becomes fierce. Stately decides it needs to expand its operations to get some competitive advantages. At the next Board meeting, Morticia makes a convincing business case for Stately to incorporate a subsidiary to buy Highway to Paradise Pty Ltd ("H2P"), a business that runs 3 hearses in the local area. With H2P, and some modifications to the family Manor, Morticia tells the Board that Stately could "process" triple the number of "clients" per day. Morticia assumes everyone knows that, through one of her companies, Morticia owns a 5% stake in H2P. So she simply says "if we go ahead with this, remember I'm interested." Stately incorporates a subsidiary, Freeway to Paradise Pty Ltd (F2P) to acquire H2P. However, F2P needs another $90,000 to complete the purchase. Gomez and Thing each purchase 45,000 $1 shares in F2P, so that it has sufficient funds. The deal goes through and, although they pay top market value for H2P, Stately immediately triples its daily funeral services. Business is very good. Stately's success comes to the attention of Simple Serenity Ltd, a large ASX-listed no-frills funeral operation with 113 locations nationally. ...read more.

It was held the directors had breached their duty, despite their good intentions. Liability did not depend on fraud, or whether the profit should have gone to the company; it arose from "the mere fact of a profit having been made".14 They should have obtained the members' approval. Similarly, Gomez and Thing bought the shares to allow the subsidiary to acquire H2P, but they did not declare full details to the company's members or obtain their approval. Applying Regal,15 it is likely they would be liable to pay back their profits. (237) Question 3: The share issue, resolution to sell and sale contracts Facts/Issues: Thing and Gomez caused Stately to issue 100 shares each to themselves, so they could pass the resolution to sell. If the issue is set aside, the resolution did not have the required 75% member approval and might be set aside. Gomez also wants to rescind the sale. Law: Directors have an equitable fiduciary duty to exercise their powers in good faith, and for a proper purpose: Bailey v Mandala Private Hospital Pty Ltd;16 Whitehouse v Carlton Hotel Pty Ltd.17 Section 1322(2) CA allows a court to set aside a resolution where it has procedural irregularities that cause substantial injustice which cannot be remedied any other way. Where directors breach their fiduciary duty, rescission may be ordered: Transvaal Lands Company.18 The company must seek rescission, as the duties are owed to the company - 'it is the board of directors, as part of their management power who decide to litigate in the company's name'.19 Application: Share issue: The power to issue shares must be used to raise capital for ...read more.