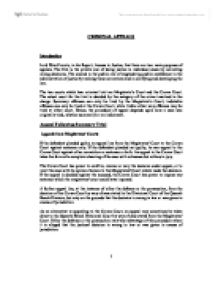 CRIMINAL APPEALS Introduction Lord Woolf wrote, in his Report, Access to Justice, that there are two main purposes of appeals. The first is the private one of doing justice in individual cases by correcting wrong decisions. The second is the public one of engendering public confidence in the administration of justice by making those corrections and in clarifying and developing the law. The two courts which hear criminal trial are Magistrate's Court and the Crown Court. The actual court for the trial is decided by the category of the crime involved in the charge. Summary offences can only be tried by the Magistrate's Court; indictable offences can only be tried at the Crown Court, while triable either way offences may be tried at either court. Hence, the procedure of appeal depends upon how a case was originally tried, whether summarily or on indictment. Appeal Following Summary Trial Appeals from Magistrates' Courts If the defendant pleaded guilty, an appeal lies from the Magistrates' Court to the Crown Court against sentence only. If the defendant pleaded not guilty, he can appeal to the Crown Court against either conviction or sentence or both. ...read more.

May/June 2004 APPEAL FOLLOWING TRIAL ON INDICTMENT A) APPEALS BY THE DEFENDANT A defendant who has been found guilty of an indictable offence and sentenced can appeal against conviction on facts or points of law, and also against sentence, with the leave to appeal (or permission) of the Court of Appeal. The general grounds of appeal are that the conviction is unsafe or sentence too severe. An independent body called Criminal Review Commission was established in 1997 to consider cases where 'miscarriage of justice' were alleged (with appeal routes in the legal system have been exhausted) and, where appropriate, to refer these case to the Court of Appeal. On the other hand, it is open to the prosecution to ask the Attorney General to seek leave from the Court of appeal to consider an unduly lenient sentence. The Court of Appeal has the power to increase the sentence accordingly. The Attorney-General may also refer a point of law to the Court of Appeal following prosecution concern about acquittal. The defendant may appeal but only with leave of the Court of Appeal or trial judge against conviction in the Crown Court, to the Court of Appeal, criminal division, on a question of law. ...read more.

The Criminal Appeal Act 1995 repealed s17. The Criminal Cases Review Commission took over responsibility for referring possible miscarriages of justice to the Court of Appeal, on March 31 1997. The powers of the Commission (under the 1995 Act) include the following: (a) At any time to refer to the Court of Appeal the conviction and/or sentence of any person tried in the Crown Court (s9). (b) At any time to refer to the Crown Court the conviction and/or sentence of any person tried by a magistrates' court (s11). (c) To investigate matters referred to it by the Court of Appeal (s23A, see below). (d) To consider any matter referred to it by the Home Secretary in connection with the exercise of the prerogative of mercy (s16). On an appeal against conviction the Court of Appeal is able to direct the Commission to investigate and report on any matter if: (i) the matter is relevant and ought to be resolved before the case is decided; (ii) the matter is likely to be resolved by the court as a result of the investigation; and (iii) the matter cannot be resolved without an investigation (s23A). 1 ...read more.