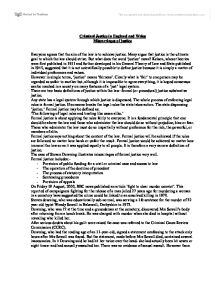 Criminal Justice in England and Wales Miscarriages of justice Everyone agrees that the aim of the law is to achieve justice. Many argue that justice is the ultimate goal to which the law should strive. But what does the word 'justice' mean? Kelson, whose theories were first published in 1911 and further developed in his General Theory of Law and State published in 1945, suggested that it is not scientifically possible to define justice because it is simply a matter of individual preferences and values. However in simple terms, 'justice' means 'fairness'. Clearly what is 'fair' to one person may be regarded as unfair to another but, although it is impossible to agree everything, it is hoped consensus can be reached in a society on many features of a 'just' legal system. There are two basic definitions of justice within the law- formal (or procedural) justice substantive justice. Any state has a legal system through which justice is dispensed. The whole process of enforcing legal rules is formal justice. If someone breaks the legal rules the state takes action. The state dispensing 'justice.' Formal justice may be defined as: 'The following of legal rules and treating like cases alike.' Formal justice is about applying the rules fairly to everyone. It is a fundamental principle that one should be above the law and those who administer the law should do so without prejudice, bias or fear. Those who administer the law must do so impartially without preference for the rich, the powerful, or members of elite. Formal justice says nothing about the content of the law. Formal justice will be achieved if the rules are followed no matter how harsh or unfair the result. Formal justice would be achieved no matter how immoral the law so as it was applied equally to all people. It is therefore a very narrow definition of justice. The case of Steven Downing illustrates miscarriages of formal justice very well. ...read more.

Aristotle supported this view and believed that the higher law could be discovered from nature (natural law). Others, such as the medieval scholar Aquinas (1225-1274), thought that the higher law derived from God as set out in the Catholic Doctrine, stating the fundamental criteria if justice. Natural law theories have been criticised heavily. It has been argued that natural rights are meaningless. They cannot be 'discovered' but must be interpreted, and who is to interpret what they are? Aquinas based his natural rights on the catholic religion, but these may conflict with other religions. It is difficult to see how this theory of justice can apply in a pluralistic society such as ours. An example of the application of natural rights theories can be found in relation to international declarations of human rights such as the United Nations Declaration (1948) and the European Convention on Human Rights (1953). Bentham's Utilitarianism theory of justice was based on the idea that society should work towards the greatest happiness for the greatest number, at the expense of the minority. A law could therefore be just even it created social inequalities. The main criticism of the utilitarian movement is the willingness to trade the unhappiness of the minority against the happiness of the majority. The approach focuses only for the community as a whole and leaves out justice for individuals or minority groups. Other theories included Rawl's theory of justice and also Nozicks's market value theory. The mandatory life sentence has been accused of leading to miscarriages of justice. For murder, a life sentence is mandatory. The historical exploration is that it replaced the mandatory death penalty. Home secretaries have successfully defended it on the ground that, unlike the discretionary life sentence, it symbolises the unique gravity of the crime. Before the enactment of the CJA 2003, the Home Secretary determined the minimum sentence for any offender convicted of murder, rather than the judges. ...read more.

The phrase 'miscarriage of justice' was crystallised around two big cases- the Birmingham Six and the Guildford four. Other campaigns sprung up and gradually. Many of these succeeded - including the Guildford Four, Judith Ward, the Darvell brothers, the Cardiff Three, Danny McNamee, the M25 Three and the Bridgewater Four. Even cases from beyond the grave, such as Derek Bentley and Hussein Mattan, have been revisited and names cleared. But there are still many people in prison proclaiming their innocence. Since 1984 two pieces of legislation have been introduced in an attempt to prevent further miscarriages. The Police And Criminal Evidence Act (PACE) gave detectives rigid rules on how long they could question suspects for and insisted interviews be taped to ensure there was no mistreatment or undue intimidation. The Criminal Procedure and Investigations Act was also introduced in an attempt to make sure police or the Crown Prosecution Service (CPS) disclose to the defence everything which could be relevant to their case. However a recent review of disclosure undertaken by the Crown Prosecution Service Inspectorate found the CPIA did not have the 'confidence of criminal practitioners'. Paddy Hill, who was one of the Birmingham Six, is sceptical such legislation is enough. Mr Hill has sat up his own pressure group Miscarriages Of Justice Organisation (MOJO), has said that 'justice is something that is not on this government's curriculum.' He said the criminal justice system needed a radical overhaul to make it 'more open and accountable'. He also suggested that there should be changes in the law to ensure police officers who break the law are concvicted and sent to prison. Chris Mullin MP,stated that, 'We should never be complacent. The system has improved considerably since the big miscarriages of the mid-1970s. PACE, which came in in 1983, had regulated interviews and improved the treatment of suspects and just about all interrogations are now recorded. But the most important change is that people who believe they are the victims of miscarriages of justice have somewhere to go: the CCRC. ...read more.

Good. What proposals for reform have been advanced in 2013?