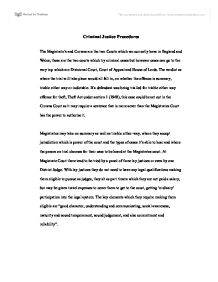 Criminal Justice Procedures The Magistrate's and Crowns are the two Courts which we currently have in England and Wales; these are the two courts which try criminal cases but however cases can go to the very top which are Divisional Court, Court of Appeal and House of Lords. The verdict as where the trial will take place would all fall in, on whether the offence is summary, triable either way or indictable. If a defendant was being trialled for triable either way offence for theft, Theft Act under section 1 (1968), this case could be set out in the Crowns Court as it may require a sentence that is more sever than the Magistrates Court has the power to authorise it. Magistrates may take on summary as well as triable either-way, where they accept jurisdiction which is power of the court and the types of cases it's able to hear and where the person on trial chooses for their case to be heard at the Magistrates court. At Magistrate Court there tend to be tried by a panel of three lay justices or even by one District Judge. ...read more.

Majority of Barristers are trained in a specific field which allocates them to work extremely good because they specialise in a small sector. For example this can be conducted by, "the work of a criminal barrister is likely to involve a lot of advocacy in court, a family law barrister may be representing clients in court in a contact dispute or divorce case, but equally may be involved in mediation as a way of avoiding the need to go to court and a barrister practising chancery law will act in 'traditional' chancery cases related to wills, probate and trusts but may also be heavily involved in providing advice and negotiating on corporate and commercial matters etc. Some barristers can continue their journey and becomes a judge and may also become involved with the development of legal policy and strategy This however didn't affect the courts mental thinking process, the court heard that as she pleaded guilty her sentence would be reduced, however if she pleaded not guilty she would of got nine months, but she only received hundred and eighty one days in prison. As the defendant had already gone prison she had a probation officer opinion given in court, stating that she has been well behaved when she ...read more.

If the defendant is found guilty, it is then the role of the judge to pass sentence. As the case continues, at the end the judge would then help the jury on any appropriate points of the law, and all of the juries will then decide whether the genuinely believe if the defendant is guilty or not. If the decision goes in favour of the defendant as not guilty the person on trial is found not guilty the judge would then decide the appropriate sentence to give on the defendant. If the defendant then say they are guilty the judge would then deal with the particular case by themselves with no jury.. To conclude improving the importance of multi agency involvement could be a factor because it would reduce defendants going to court again so when they do rehabilitate they wouldn't need to go in again if there is a good service available to them, so they could work with someone on a one to one basis which could include social workers, probation officers, or other services so they could lead on to the right path and get a decent job with an average salary. If I had more word space I would then go on and continue how to reform and improve these particular services. ...read more.