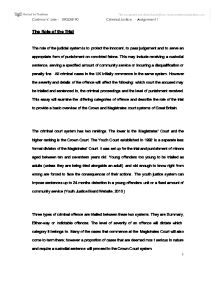 The Role of the Trial The role of the judicial system is to protect the innocent, to pass judgement and to serve an appropriate form of punishment on convicted felons. This may include receiving a custodial sentence, serving a specified amount of community service or incurring a disqualification or penalty fine. All criminal cases in the UK initially commence in the same system. However the severity and details of the offence will affect the following: which court the accused may be trialled and sentenced in, the criminal proceedings and the level of punishment received. This essay will examine the differing categories of offence and describe the role of the trial to provide a basic overview of the Crown and Magistrates court systems of Great Britain. The criminal court system has two rankings. The lower is the Magistrates' Court and the higher ranking is the Crown Court. The Youth Court established in 1992 is a separate less formal division of the Magistrates' Court. It was set up for the trial and punishment of minors aged between ten and seventeen years old. Young offenders too young to be trialled as adults (unless they are being tried alongside an adult) and old enough to know right from wrong are forced to face the consequences of their actions. ...read more.

A trial held by the Crown Court relies on a panel of Jurors to deliver a verdict on an accused persons innocence or guilt. The principle of 'adversarial justice' is central to the judicial system. This means that the jury must be convinced 'beyond reasonable doubt' that the defendant is guilty of committing the crime they have been accused of. The court proceedings will be overseen by a Judge who will support the Jury and make sure that the trial is conducted appropriately. Depending on the type of trial for example, civil versus criminal or the severity and complexities of a particular case there are three types of judge that may be present in court. The role of the judge is to oversee entire proceedings and ensure a fair trial. They must be impartial and when necessary decide the admissibility of evidence and settle disputes between counsels. All judges must be a legal professional with a minimum of ten years experience. The High Court Judge is the most senior position and can deal with even the most severe offences such as murder. Circuit Judges and Recorders and Assistant Recorders share the same jurisdiction and can try all criminal offences except murder. The only notable difference between the two is that while recorders are employed part-time circuit judges are employed fulltime. ...read more.

They are required to provide factual information beyond the knowledge of laypersons and if requested may provide specialist opinion within their area of expertise. After all the evidence has been heard, both counsels will make a closing speech. The judge will present a summary of the facts and evidence to the jury and remind them of the legalities concerning the case. Following this the jurors will retire for a period to consider the evidence presented. Depending on the details of the case they will make an impartial decision regarding the accused person/s guilt or innocence. For a jury to successfully return a verdict there must be a majority agreement between ten of the twelve people present. If this is not possible then a close majority decision can be accepted at the judge's discretion. Once the jury has reached a verdict they will be asked to state it aloud. The judge has no role when deciding the verdict but he must serve justice either by passing a sentence or acquitting the defendant as appropriate. In essence, this essay has provided an overview of the criminal justice process. It has offered an insight into the type of offences that may be trialled in both the Magistrates' Court and the Crown Court and has explored the various roles that ordinary members of the public and legal professionals play within the judicial system of Great Britain. . ...read more.

I think this essay is very good. It covers the key topics well, and in some depth.