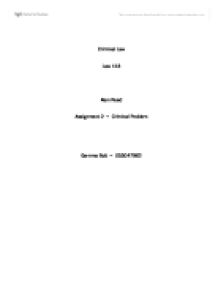 Following this Celestine would be liable for rape under Section 1 of the Sexual Offences Act 200331. Celestine may also be liable as a secondary offender to the murder. In order to establish liability as a secondary party it must be proved following Bainbridge 196032 and Maxwell 197833 that Celestine had knowledge of the type of crime that was committed34 and was one within his contemplation35. It is relatively clear Celestine had no knowledge or contemplation of either murder being committed as it was part of the joint enterprise that no weapons or violence would be used and could therefore not be held liable for either murder. Another person involved is Shay however he is not directly part of the joint enterprise, he has been approached by Alan who demanded the return of ladders. Due to this Shay may be liable as a secondary offender to a range of offences. He has provided equipment for Alan to use in a burglary and has knowledge of the type of crime which may be committed. Therefore following Bainbridge 196036 Shay could be held liable for aiding burglary. However Shay has simply returned equipment which belongs to Alan and following Lomas 191337 cannot be regarded as a secondary party for this. However Shay has not returned the equipment of his own accord, he has been approached by Alan who has demanded their return and by returning the equipment has aided burglary. Following Maxwell 197838 Shay also suspects that Alan needs the equipment for a burglary as he is aware of Alan's previous convictions. This constitutes the mens rea for aiding and abetting burglary which Shay would be liable for. ...read more.

In Doughty 198662 it was held that provocation simply needs to be something said or done63. Shola has been ridiculed about his ears and has been referred to as Dumbo the elephant. It would be sufficient that these words amounted to provocation. However these words must have caused Shola to suddenly and temporarily lose self control. This principle was stated in Duffy 194964. It is clear that the provoking words were enough for Shola to lose his self control suddenly and temporarily. This would satisfy the subjective test. The second part of the test is objective and requires the provocation to make a reasonable man with the same characteristics, react in the same way65. This comes from Camplin 197866. For a characteristic to be relevant the feature must have a degree of permanence and there must be a connection between the characteristics and the provocation67. Shola has a control characteristic of being depressed and a response characteristic of being ridiculed about his protruding ears. Therefore it must be asked whether a reasonable depressive man being ridiculed about his protruding ears would have reacted the same as Shola. Following Smith Morgan 200068 a depressive state was a characteristic that could be taken into account when considering provocation69. Therefore on this basis it is likely that a defence of provocation would be accepted and is likely to be successful. This means Shola would not be held liable for the murder of Lee. However provocation is only a partial defence meaning that Shola would still remain liable to a charge of voluntary manslaughter. Alan, Titus, Celestine, Shay and Shola may be liable for a range of offences at different levels following the principles outlined. However the jury would be left to decide where liability lies for each offence. ...read more.

Good discussion of joint enterprise, and participation in crime.