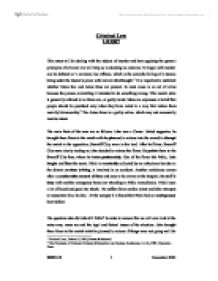 Criminal Law,dealing with the subject of murder and how applying the general principles of criminal law will help us in deciding an outcome

Criminal Law LR2S07 This essay will be dealing with the subject of murder and how applying the general principles of criminal law will help us in deciding an outcome. To begin with murder can be defined as 'a common law offence, which is the unlawful killing of a human being under the Queen's peace with malice aforethought.'1 It is important to establish whether Mens Rea and Actus Reus are present. In most cases is an act of crime because the person committing it intended to do something wrong. This mental state is generally referred to as Mens rea, or guilty mind. Mens rea expresses a belief that people should be punished only when they have acted in a way that makes them morally blameworthy.2 The Actus Reus is a guilty action, which may not necessarily involve intent. The main facts of the case are as follows: John was a Carsea United supporter, he brought three flares to the match with he planned to release into the crowd to disrupt the match is the opposition, Swaniff City, were in the lead. After half time, Swaniff City were clearly leading so John decided to release the flares. ...read more.

Referring to the cases of Malcherek (1981) 1 WLR 690 and Pagett (1983) 76 Cr App R2799 if Pablo's death was caused by a combination of the two causes and Johns act remains a significant cause then he will be liable. Pablo's unfortunate situation at the hospital can be taken into account by discussing how his treatment may have contributed to his death. The Oxford Journal of Legal Studies states that the courts are unwilling as a matter of policy to find that medical treatment has broken the chain of causation when it follows an initial unlawful act by someone else. The case of Jordon (1956) 40 Cr App R 152 no longer has much strength on its outcome as the case of Smith (1959) 2 QB 35. The Court of Appeal has subsequently confirmed the approach taken in Smith, indicating that Jordon has practically no relevance any more, except in the most 'extraordinary or extreme'10 case. It is evident from looking at these cases that the chain of causation will virtually never be broken by medical negligence and that the law will follow this rule as set down in Smith and as applied recently in Cheshire (1991) ...read more.

2) Did John foresee it as virtually certain to occur? Taking these questions into account, John did point the flares at the Swaniff fans, 'whom he hates passionately'. These two questions only apply when there is not direct intent, after analysing the facts, one can say that John did see some sort of damage to occur and it can be said that the consequence of someone getting hurt was a virtual certainty, but the notion of intent to kill may not have been present. Section 18 OAPA 1861 states that wounding or GBH which must be inflicted 'maliciously', but the word 'maliciously' means foresight of the consequence. John must have had to have foreseen a risk and recklessly gone ahead and taken it. Intention to cause grievous bodily harm, but not to cause death, is sufficient to establish the mens rea for murder. John, if found reckless, would be faced with manslaughter. Caldwell [1982] C 341 has been overruled by the House of Lords in R v G and Another [2003] UKHL 50 and now a subjective test for recklessness applies to criminal damage. In conclusion, John is not guilty of murder but guilty of manslaughter. Oblique intent can be said to exist or be capable of existing when John saw the consequence as certain or virtually certain as a result of his actions. ...read more.

A good essay, addressing the key issues and cases. Some of the finer points have been overlooked, however.