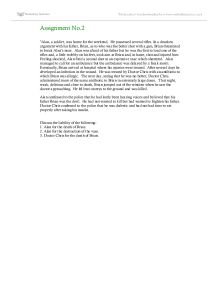 Assignment No.2 "Alan, a soldier, was home for the weekend. He possessed several rifles. In a drunken argument with his father, Brian, as to who was the better shot with a gun, Brian threatened to break Alan's nose. Alan was afraid of his father but he was the first to load one of the rifles and, a little wobbly on his feet, took aim at Brian and, in haste, shot and injured him. Feeling shocked, Alan fired a second shot at an expensive vase which shattered. Alan managed to call for an ambulance but the ambulance was delayed by a freak storm. Eventually, Brian arrived at hospital where his injuries were treated. After several days he developed an infection in the wound. He was treated by Doctor Chris with an antibiotic to which Brian was allergic. The next day, seeing that he was no better, Doctor Chris administered more of the same antibiotic to Brian in extremely large doses. That night, weak, delirious and close to death, Brian jumped out of the window when he saw the doctor approaching. He fell two storeys to the ground and was killed. Alan confessed to the police that he had lately been hearing voices and believed that his father Brian was the devil. He had not wanted to kill but had wanted to frighten his father. Doctor Chris confessed to the police that he was diabetic and had not had time to eat properly after taking his insulin. ...read more.

Whether Alan has committed murder or manslaughter is difficult to assess because the line between oblique intention and recklessness very fine. Academic commentators such as Professor Norrie have expressed their dissatisfaction in relation to this area of the law, conveying that the view from Woollin does not "constitute the last word on indirect intention for murder"18. Insanity might be put forward by the defence since Alan had lately been hearing voices. The test for insanity, arising from M'Naghten's Case19, consists of three elements, each of which needs to be proved by the defendant on a balance of probabilities. A successful plea of insanity would result in a hospital order20. The first element of the test is that there must be a disease of the mind, an internal cause of involuntary action (Bratty21, Sullivan22). Hearing voices and believing that his father was the devil would constitute a disease of the mind. The second element, that the defect must affect the cognitive faculties of memory, reason and understanding (Clarke23), probably also applies as Alan's perception was deluded. It is the last element, the cognitive tests, where the defence is likely to fail since the defendant must not know that what he is doing is legally wrong (Windle24). Since Alan probably still knew that murder is against the law, the defence is likely to fail. A further relevant defence is intoxication, as it applies to crimes of specific intent, such as murder, because it may negate mens rea (Majewski25, Kingston26). ...read more.

If Brian's suicide constituted a novus actus interveniens, then Chris will not be liable of manslaughter; if it is found that Doctor Chris caused the death, it will be for the jury to decide whether his conduct had departed from the proper standard of care involving a risk of death so as to be judged criminal. Should Chris be convicted of gross negligence manslaughter, he might be able to rely on the defence of automatism. He is diabetic and had, on the day in question, taken insulin but not eaten suitably, meaning that he was hypoglycaemic which is in law classified as automatism, a justificatory defence. However, according to Quick47, self-induced incapacity will not excuse nor incapacity which could have been reasonably foreseen by the defendant since this would be recklessness. Therefore, the question of whether a defendant knew of the risk of hypoglycaemia is crucial. Since Chris is in the medical profession it will probably not be difficult for the prosecution to prove that he was aware of the risk of hypoglycaemia occurring. Furthermore, the fact that he told the police that he had taken insulin but failed to eat shows that he was aware of his hypoglycaemia. It is therefore likely that Doctor Chris will be convicted of manslaughter and he will probably not be able to rely on the defence of automatism. Because of public policy, gross negligence manslaughter convictions in medical cases are relatively rare since the state would otherwise have to convict numerous doctors. However, recently prosecutions of doctors have occurred more frequently due to the public awareness of patient safety48. ...read more.

On the whole, a fairly thorough examination of the law on murder. Better application of medical treatment in the context of causation, to the facts, is needed here. The law on provocation is also now outdated; the new defence of "loss of control" applies. 4 stars.