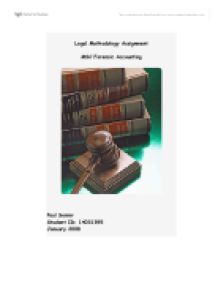 Critical Analysis of the role of Solicitors &amp; Barristers

Legal Methodology Assignment MSC Forensic Accounting Paul Senior Student ID: 14031395 January 2008 CONTENTS Page(s) 1. Introduction 3 2. Provision of Legal Services 4 2.1. Solicitors 4 2.2. Barristers 5 3. Fusion of the Professions 7 4. Conclusions 11 5. References and Bibliography 12 1. Introduction "There is little evidence to suggest that the formal division between barristers or solicitors is likely to end...ongoing changes may ultimately prove to have as significant an effect on the legal profession as a formal merger of the two branches. (Malleson, 2007) The provision of legal services in England and Wales involves many different types of personnel such as legal executives, licensed conveyancers, and legal clerks. But the two main providers of legal services are solicitors and barristers, and these are the professions I will be focussing on in my paper. The distinction between solicitor and barrister is growing ever smaller, and the fusion of the two professions has been spoken of at length in the past. Malleson (2007, p191) argues that due to changes in the two professions in recent times, fusion may no longer be necessary. In recent years, the working practices of both solicitors and barristers have changed significantly, and it is predicted that they will continue to change. Malleson believes that these ongoing transformations in the professions will actually provide a similar, if not more beneficial change to the provision of legal services than an actual merger of the two branches. This purpose of this paper is to critically analyse Malleson's viewpoint. Firstly, I will describe the functions of both solicitors and barristers, and critically analyse each profession individually, detailing both roles, identifying similarities and exclusive differences. Secondly, I will look at the possibilities of fusing the two professions, analysing the positives and negatives of such action, and will also consider the modernisation of the professions. Finally, I will form a conclusion as to whether I agree with Malleson, and detail my argument with regards to the merger of the two branches. 2. ...read more.

Should fusion occur, it would almost certainly lead to a reduction in duplication of work and fees. This would result in court representation being carried out by one person, as opposed to the current practice, where both a solicitor and a barrister are usually required. Currently, solicitors send all paperwork from a case to a barrister, which can be seen as unnecessary, and would be eradicated if there was only one profession, as one person could manage a case from start to finish. It would be far more efficient and would give the added benefit of saving time and effort on the client's, solicitor's and court's behalf. One of the failings of the current legal system is public access to the people actually representing them in higher court. Research shows that as many as 96% of defendants pleading guilty did not see their barrister until the day of the trial. Of defendants pleading not guilty, this reduces to and 79%, which is still an extremely high figure (Bottoms and McLean 1976, p158). Is this fair on the client? Many argue not - it would be better for a barrister to engage with a client earlier in the process, after all, a barrister's main function is to act on behalf of a client, even though their solicitor appointed them. This puts further credence to the argument of having in-house barristers. You could also be presented with a situation that means a new barrister is appointed the day before a case goes to court. When a barrister is initially instructed, they will start reading the case but may not have availability once the court date is known, leading to a late change in counsel. A way to resolve this would be to look at changes in the way cases are given court dates. Instead of having the traditional 'window' for dates, perhaps it would be better to provide a specific date and adhere to that date. ...read more.

As such, the solicitor has a greater understanding of the needs of the clients. This distinction itself is decreasing with the higher rights of advocacy being granted to solicitors, and the two professions are slowly evolving into one. To change to a single profession would mean changing the tradition behind the legal professions, which have worked the same way a considerable amount of time. The legal system is changing every day to accommodate for the changes in society and it seems logical that the professions that support it should change at the same pace. Unfortunately this is not the case and to change suddenly would severely disrupt the legal system, and could lead to serious issues with legal cases. Overall I concur with Malleson's view that the changes are having a significant effect on the professions and perhaps more so that a formal merger could achieve. At present, the best way forward for the legal profession is for a restructure and modernisation to take place. The argument should not be about the fusion of the professions - but what can be done to make the professions work better together? More research needs to be put into this area, and more 'in-house' operations would be beneficial, with barristers working for solicitors firms directly. If this happened, then surely a law firm could, in theory, provide a better service to its clients, as the barrister would/should be more knowledgeable of their case, which should also result in lesser duplication of work, as solicitors and barristers would work closer together. The only potential issue here is the creation of monopolistic law firms. One prevalent point made in Sayer's article (1999), was that if fusion did occur, then it would require not only the merging of the professions, but a merger of all elements surrounding this - so there would need to be a merger of code of conducts and regulators. Its safe to assume that fusion may be easier said than done. Word count - 3172 (excluding contents and bibliography) 5. ...read more.