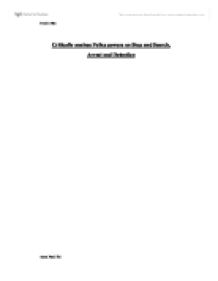 Critically analyse Police powers on Stop and Search, Arrest and Detention The report carried out by Lord Scarman included several recommendations about reforming the law, community relations and policing practices to help tackle the central problems which caused civil disorders. As part of these recommendations, Lord Scarman advocated a system for members of the public from local communities to inspect the way the police detained people in their custody. Originally referred to as lay visiting, independent custody visiting is the system that has been developed to meet this recommendation At the time, the majority of the Scarman Reports' recommendations, found favour with the opinion makers and were included in the Police and Criminal Evidence Act which was made law in the mid-1980. This act of parliament set out the way in which the police officers must carry out their roles and stated specific codes of practices for police procedures. It also established the rights of people who are detained by the police for a suspected crime or offence. Police powers to stop and search are contained in s.1-7 of PACE, though there are other statutes such as the Misuse of Drugs Act 1971 which gives the police powers to stop and search people in connection with particular offences. S.1 of PACE 1984 gives police officers the right to stop and search a person or a vehicle in a public or a place to which the public have access, provided that the police officers have reasonable grounds to suspect that they will find stolen or prohibited articles. The term "reasonable grounds" is based on the objective test, based on what an ordinary person may think is reasonable. The power of stop and search is legal only if a reasonable person would suspect that there are stolen or prohibited articles to find, meaning that police officers cannot randomly stop and search people if they feel there is a possibility that they might find a prohibited article. ...read more.

The custody officer may also authorise a search to the extent considered necessary and a detainee must be searched by officer of the same sex. At this stage, the Custody Officer can inform the detainee of the decision to detain them and the reasons for this and must record them on the Custody Record. After detention is authorised, the detainee is informed of his or her rights: free legal advice, have someone informed of their arrest, and consult a copy of the Codes of Practice. The detainee is also provided with a copy of those rights and a notice of their entitlements/conditions of detention. Once detained, there are limits on detention. A person can be held up to 24 hours without charge, this may be extended to 36 hours with Superintendent's authority, the court may also authorise up to 96 hours. Reviews of detention are carried out periodically, 6 hours after detention and subsequent reviews at 9 hour intervals. Before a charge is bought, the duty inspector acts as the reviewing officer and after a charge the custody officer fulfils this role. After enquiries are completed, the detainee must be released (unless certain conditions apply) either with or without bail. Otherwise, if there is sufficient evidence, the Custody Officer may authorise a charge. All studies on the impact of PACE point towards the idea that it was exceptional for the custody officer to refuse to allow the detention of suspects. It is possible to argue the fact that a Custody Officer is unlikely to refuse to allow a suspects detention owing to solidarity with the arresting officers. The "solidarity" aspect of the Custody Officers role is stressed by McConville et al, The suspect's right- The right to legal advice. One of the aims of PACE was to provide balance between the police's rights and the rights of the detainees'. The most important right provided by PACE was the right to legal advice. ...read more.

He then changed his story yet again saying he was telling the truth at the trial and the only reason he said otherwise was because he wanted publicity. Due to Thompson's incompetence the COA quashed Stone's conviction and ordered a re-trial. Fortunately Stone was convicted and sent for life imprisonment. There are also many other cases which illustrate the miscarriages of justice another being the Birmingham 6. If the prosecution proposes to give in evidence confession evidence made by the accused person, there might be a possibility that the evidence was obtained under oppression. If this is the case then to court will render the evidence unreliable, and will not allow the confession given against him. Section.76 of PACE considers "oppression" to be torture, inhuman or degrading treatment, and the use of threat or violence. "Oppression" was defined in the case of Fulling 1987 as an "exercise of authority or power in a burdensome harsh or wrongful manner; against or cruel treatment of suspects". Unreliable evidence may also be excluded from the courts under s.78 of PACE, which allows the court the choice to prohibit evidence where its use would have an "adverse effect on the fairness of the proceedings" Despite s.76 and s.78 there is evidence that points towards courts still allowing unreliable evidence to pass through the courts. An illustrative example was in the case of Paris, Abdullahi and Miller 1992 (Cardiff 3). In this case the main evidence against one of the defendants was confession evidence during police interrogation. Miller was interviewed by the police for 13 hours over a period of 5 days. During this time he denied being involved with the murder of the prostitute over 300 times, until he finally admitted being at the scene of the crime. The COA quashed the convictions of all three relying on s.76 and s.78 of PACE. Therefore the COA held that the questioning was oppressive and the confession given by Miller could not b used as evidence as it was gained through oppression. PACE 1984 Asma Patel 72d ...read more.