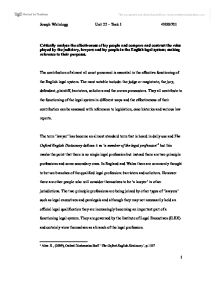 Critically analyse the effectiveness of lay people and compare and contrast the roles played by the judiciary, lawyers and lay people in the English legal system; making reference to their purposes.

Critically analyse the effectiveness of lay people and compare and contrast the roles played by the judiciary, lawyers and lay people in the English legal system; making reference to their purposes. The contribution of almost all court personnel is essential in the effective functioning of the English legal system. The most notable include: the judge or magistrate, the jury, defendant, plaintiff, barristers, solicitors and the crown prosecutors. They all contribute to the functioning of the legal system in different ways and the effectiveness of their contribution can be assessed with references to legislation, case histories and various law reports. The term 'lawyer' has become an almost standard term that is heard in daily use and The Oxford English Dictionary defines it as 'a member of the legal profession'1 but this masks the point that there is no single legal profession but instead there are two principle professions and some secondary ones. In England and Wales there are commonly thought to be two branches of the qualified legal profession: barristers and solicitors. However there are other people who will consider themselves to be 'a lawyer' in other jurisdictions. The two principle professions are being joined by other types of 'lawyers' such as legal executives and paralegals and although they may not necessarily hold an official legal qualification they are increasingly becoming an important part of a functioning legal system. They are governed by the Institute of Legal Executives (ILEX) and certainly view themselves as a branch of the legal profession. Barristers, especially those who practice as advocates, are often referred to as 'counsel'. The stereotypical view of a barrister is that they spend most of their time in court; in part because once they are qualified a barrister has rights of audience in every court. However this general impression is not strictly accurate. Whilst it is true to say that barristers specialize in litigation and advocacy, it does not mean that all of their time will be spent in court as one may expect from criminal and family practitioners, this depends on their area of practice. ...read more.

The chairman of the bench said: "Quite the most unpleasant cases that we have to decide are those where the evidence is a direct conflict between a police officer and a member of the public. My principle in such cases has always been to believe the evidence of the police officer, and therefore we find the case proved".8 The conviction was quashed on appeal because of this remark. The stereotypical view of the background of lay magistrates also serves as a significant disadvantage as they should be seen to have come from varied social backgrounds. However the facts are that they remain to be predominantly white, middle class and middle-aged, with a strong Conservative Bias. The selection process has been blamed for the general narrowness of magistrates' backgrounds: Elizabeth Burney's 19799 study into selection methods concluded that the process was almost entirely dominated by existing magistrates who over and over again simply appointed people with similar backgrounds to their own. Magistrates from a narrow social and ethnic background do indeed make the bench unrepresentative of the general public thus weakening confidence further in it's decisions as a part of society in general. Furthermore; for them to be seen as unrepresentative of the community as a whole is unequivocally damning to the justice system. Downs' argument that those 'set in authority over us always tend to be middle to upper class'10 is not a good enough reason in itself for not trying to change things. Furthermore, while men and women are represented almost equally in the magistracy, the number of ethnic minority magistrates gives some cause for concern. Despite this reflecting the general percentage of minority communities in the population, this still means that 'white' benches administer justice in areas where communities are much more diverse. Points to consider when countering such criticism against lay magistrates are that although they do tend to be middle-class and only represent a narrow strand of society, magistrates are probably nearer in social context to defendants than judges and ultimately they can be chosen only from those who come forward. ...read more.

is another problem with relation to the amount of time it takes to reach a verdict. However, The Criminal Procedure and Investigation Act 1996, allows the prosecution to retry an acquitted defendant if someone is subsequently convicted of interfering with jurors. On the other hand a few members of a jury can be influential, even intimidating, in swaying the minds of less assertive jurors and it has been argued that juries are more susceptible to intimidation or bribery than legal professionals. In addition to this, while jurors are deliberating during the trial the judge will usually tell them at the end of each day not to make any enquiries into the case. Despite this, it is by no means impossible that publicity outside of the court house, particularly the internet, may have affected the extent to which jurors can reasonably be expected to heed the judge's directions about not looking for information regarding their case. It further causes distress to jury members. Juries trying cases involving serious crimes of violence, particularly rape, murder or child abuse, may have to listen to deeply distressing evidence, and in some cases to inspect graphic photographs of injuries. It is inevitable that some jurors may be biased for or against certain groups and individual prejudices can be unchallenged in the jury setting and even go unnoticed. For example, they may favour attractive members of the opposite sex, or be prejudiced against the police. Bias appears to be a particular problem in libel cases, where juries prejudiced against newspapers award huge damages, apparently using them punitively rather than as compensation for the victim. One argument is that of Lord Denning who suggests that 'the selection of jurors is too wide, resulting in jurors that are not competent to perform their take.'19 Praising the 'golden age' of jury service when only 'responsible heads of household from a select band of the middle classes' were eligible to serve, he claimed that changes have led to jurors being summoned who are not sufficiently intelligent or educated to perform their task properly. ...read more.