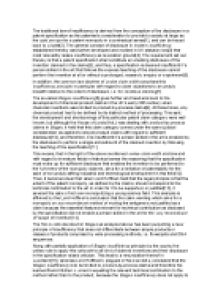 Critically analyse what makes for sufficient disclosure in the description of a patentable invention, focusing in particular on Biogen v Medeva and subsequent related cases. Is this a case of one rule for simple products and another for complex product-by-process claims?

﻿The traditional law of insufficiency is derived from the conception of the disclosure in a patent specification as the patentee's consideration to provide to society at large as the quid pro quo for a patent monopoly in a contractual sense[1], and can be traced back to Liradet[2]. The general concept of disclosure in modern insufficiency established thereby was further developed and molded in UK statutory law[3] that most relevantly raises insufficiency as revocation ground[4]. The requirement set out thereby is that a patent specification shall constitute an enabling disclosure of the invention claimed in the claims[5], and thus, a specification is deemed insufficient if a person skilled in the art that follows the express teaching of the disclosure cannot perform the invention at all or without a prolonged, research, enquiry or experiment[6]. In addition, the common law doctrine of undue claim width comprises this insufficiency principle, in particular with regard to claim objections to an unduly breadth relative to the extent of disclosure, i.e. for covetous claiming[7]. The so-called Biogen insufficiency[8] goes further and hearkens back to the development of chemical product claims in the UK?s early 20th century when chemical inventions were limited to product-by-process claims[9]. At those times, any chemical product had to be defined by its distinct method of processing. This said, the development and shortcomings of this particular patent claim category were well known, but although the House of Lords (HoL) ...read more.

claims in which the technical contribution of the invention is the product itself[16], even when only one method to create it is disclosed in the patent specification[17]. Moreover, Lord Hoffmann clarified that with regard to the Biogen insufficiency, the respective statutory provisions and EPC statues as mentioned above do not lead inevitably to the conclusion that simple product claims must also support all methods of creating the product[18]. In conclusion, the marriage of ?sufficiency disclosure? concept to the invention itself as defined in the claims under the clarification in Lundbeck was confirmed in Conor Medsystems[19]. Hereby, it was established that when determining the inventive step, it is only necessary to consider the invention as defined by the claims, and not in the disclosure in the patent specification[20], and therefore, there is still room for debate in this issue, when the scope of invention is to be construed. [1] In other words, in the age of industrialization or in times of a technology leap of industrial or otherwise applicable development, such as nowadays biotech, the proposes of disclosure is, besides to limit the scope of monopoly right granted to the inventor by the claims of the patent, to facilitate technology transfer or diffusion of knowledge. Reference is made to David J. Brennan, ?The Evolution of English Patent Claims as Property Definers? (2005) 4 Intellectual Property Quarterly pp 362-363 [2] Liardet v Johnson Unreported 1778, per Lord Mansfield in ibid supra note 1 p 370 In the late ...read more.