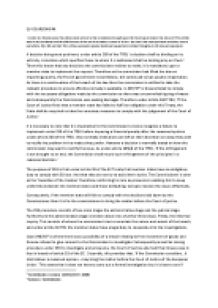 Critically assess the enforcement actions by the Commission brought upon the French government; the relevant TFEU articles need to be considered and the effectiveness of the use of secondary sources of EU law. Decision is the most pertinent secondary source and articles 258, 288 and 260.

﻿EU COURSEWORK In order to critically assess the enforcement actions by the Commission brought upon the French government; the relevant TFEU articles need to be considered and the effectiveness of the use of secondary sources of EU law. Decision is the most pertinent secondary source and articles 258, 288 and 260. This will be examined in greater detail and supported or refuted throughout with relevant arguments. A decision being most pertinent, under article 288 of the TFEU ?a decision shall be binding on its entirety. A decision which specifies those to whom it is addressed shall be binding only on them.? There this shows that any decisions the commissioner wishes to make, it is mandatory upon a member state to implement the request. Therefore as the commission had lifted the ban on importing poultry, the French government nevertheless, still continued to ban poultry importation. As there is a continuation of the breach of the law then the commission is entitled to take the relevant procedure to ensure effective remedy is available. C-387/97[1] is Greece failed to comply with the necessary obligations made by the commission as there was uncontrolled tipping of waste and subsequently the Commission was seeking damages. ...read more.

Case-240/86[2] is where there was a possibility of a breach relating to free movement of goods and Greece refused to give consent to the Commission to investigate. Subsequently as well as issuing procedure under 258 to investigate and prosecute, the Court of Justice also held that Greece was in fact in breach of article 10 of the EC. Secondly, this provides that, ?If the Commission considers...it shall deliver a reasoned opinion...may bring the matter before the Court of Justice of the European Union.? This states that it does not have to carry out a formal investigation but it is best to see if there is recognition of a breach. As the second stage is normally the formal notice which is if the issue is not resolved then a letter of communication is sent to the state concerned, in this case the French government, specifying the grounds of the breach. Furthermore, the commission does allow a 2 month time limit in which it can observe or the state in question can offer a defence. As it can be seen in Case-51/83[3]it is an essential procedural requirement. Finally, the reasoned opinion is the final pre-litigation period. ...read more.