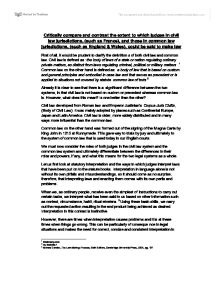 Critically compare and contrast the extent to which judges in civil law jurisdictions, (such as France), and those in common law jurisdictions, (such as England & Wales), could be said to make law First of all, it would be prudent to clarify the definitions of both civil law and common law. Civil law is defined as: the body of laws of a state or nation regulating ordinary private matters, as distinct from laws regulating criminal, political or military matters.1 Common law on the other hand is defined as: a body of law that is based on custom and general principles and embodied in case law and that serves as precedent or is applied to situations not covered by statute common law of torts.2 Already it is clear to see that there is a significant difference between the two systems, in that civil law is not based on custom or precedent whereas common law is. However, what does this mean? Is one better than the other? Civil law developed from Roman law and Emperor Justinian's Corpus Juris Civilis, (Body of Civil Law). It was mainly adopted by places such as Continental Europe, Japan and Latin America. Civil law is older, more widely distributed and in many ways more influential than the common law. Common law on the other hand was formed out of the signing of the Magna Carta by King John in 1215 at Runnymede. ...read more.

decisis means that lower courts and the judges therein, are bound by what a higher court has decided in a previous case. This is known as precedent. Courts are also binding upon themselves, except for the House of Lords, which was bound by its previous decisions up until 26th July 1966 when the Lord Chancellor, Lord Gardiner, announced on behalf of himself and all the other Lords of Appeal in Ordinary, that in future the House of Lords would regard itself as free to depart from its own earlier decisions.7 However, despite this doctrine no judge, no matter how eminent he or she may be, is entitled to tell another judge how to exercise his or her judgment in any individual case. So, it would appear that there is some leeway in the way in which a judge may interpret a piece of legislation put before him or her. Does this mean, however, that it can be said they are therefore making laws? Indeed, should a judge be able to make laws? Let us now discuss these matters further. The role of the judge is seen by many as being very clear cut and simple. However, if you look at it in more detail, it becomes evident that it is not as simplistic after all. To begin with not all judges carry the same roles. ...read more.

Indeed, a lot of our legislation now has to be interpreted in accordance with the Human Rights Act 1998. So, there is a joining of the two systems of civil law and common law when we come to look at and interpret legislation today. According to s3.(1) of the Human Rights Act 1998, "So far as it is possible to do so, primary legislation and subordinate legislation must be read and given effect in a way which is compatible with the Convention rights."12 Here it is clear that the civil jurisdiction of Europe is working in conjunction with our common law jurisdiction, without our system feeling as though we have lost the upper hand. In fact, to ensure that we do not feel as though our jurisdiction is being undermined, s3.(2)(b) & (c) even go as far as to say that our primary legislation is still supreme no matter what and s4 allows for a declaration of incompatibility to be decided in areas where our legislation may be incompatible with the Human Rights Act.13 Our judges still have the ultimate deciding factor in how the legislation is interpreted. Ultimately, one feels that as long as there are laws, statutes, legislation and indeed a legal system, one will always require the expertise of a lawyer or a judge to interpret the meanings of those materials and to argue over the minutiae of the meaning of a word. ...read more.