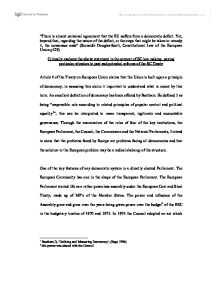 Critically evaluate the above statement in the context of EC law making, paying particular attention to past and potential reforms of the EC Treaty.

"There is almost universal agreement that the EU suffers from a democratic deficit. Yet, beyond that, regarding the nature of the deficit, or the steps that might be taken to remedy it, the consensus ends" (Sionaidh Douglas-Scott, Constitutional Law of the European Union p129) Critically evaluate the above statement in the context of EC law making, paying particular attention to past and potential reforms of the EC Treaty Article 6 of the Treaty on European Union claims that the Union is built upon a principle of democracy, in assessing this claim it important to understand what is meant by this term. An excellent definition of democracy has been offered by Beetham. He defined it as being "responsible rule according to related principles of popular control and political equality1"; this can be interpreted to mean transparent, legitimate and accountable governance. Through the examination of the roles of four of the key institutions, the European Parliament, the Council, the Commission and the National Parliaments, I intend to show that the problems faced by Europe are problems facing all democracies and that the solution to the European problem may be a radical shake up of the structure. One of the key features of any democratic system is a directly elected Parliament. ...read more.

There are some problems with the European Parliament, and the fact that these are problems shared by national governments alike does not make them any better but they should not draw focus away from the positive aspects. The Council of Ministers is made up of 'a representative of each Member State at ministerial level authorised to commit the government of that member state'14. As the Council comprises elected officials it can be argued that it is democratically accountable to a degree. Before the Single European Act for a vote to be passed in the Council the result would have to be unanimous, giving the Member States a veritable right to veto council proposals15. This was changed by Article 205 which introduced Qualified Majority Voting by which a set majority has to be met for proposals to be approved. This system means that the power over what legislation is passed rests with the many and not with the few, as under the previous system it would take only one dissenting vote to stop legislation from being made, a seemingly democratic reform. On the other hand there are some less democratic sides to the council. Although the council is made up of ministers it can be argued that it is not an elected chamber. ...read more.

It also proposed that all EC should be binding in its entirety and directly effective. This would make the EC a great deal more effective however the plan did not go far enough. On top of the proposed reforms the Parliament would have to be given a role in the Comitology procedure. The parliamentary buildings in Strasbourg and Luxembourg would have to be closed leaving one base from which it operates and there would have to be a fixed system of penalties for MEP's who miss to many debates. The Commission would also have to be reformed so that its power would not be wasted, there would need to be comprehensive reform of structure and practices29. There are problems with the European system of Democracy or lack thereof, but it is arguable that the problems facing Europe are problems facing every liberal democracy in the developed world. Europe has been created in a piecemeal way over the last half century and this has led to a confused structure and a confused and alienated population, if Europe is to survive the coming years it needs to become stronger, taking radical action at the risk of short term unpopularity, if there is to be a political union then it will need stable foundations, and that lies in stable structure. ...read more.