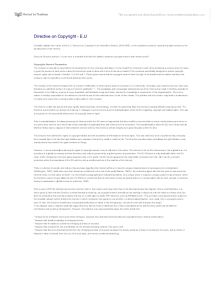 Critically evaluate the impact of the E.U. Directive on Copyright in an Information Society, 2001/29/EC, on the problems posed for musical copyright owners by the development of the Internet. Does the Directive achieve, in your view, a workable and effec

Directive on Copyright - E.U Critically evaluate the impact of the E.U. Directive on Copyright in an Information Society, 2001/29/EC, on the problems posed for musical copyright owners by the development of the Internet. Does the Directive achieve, in your view, a workable and effective balance between copyright owners and Internet users? Copyrights Owners' Perspective The concept of copyright is essential to the development of new concepts and ideas. It is the reward for composer's work when producing a song or piece of music. It gives the owners of such works a level of control over what is done with it once it has been created. The provisions specifically designed to protect copyright owners' rights can be found in Articles 1,2,3,4,6 and 7. These rights ensure that the copyright owners' have the right to be identified as the author and have the exclusive right to reproduce, control and distribute their works. The creation of the Internet brought with it a number of difficulties in enforcing the rights of composer's. It is effectively "one large copy machine that can make and distribute an unlimited number of copies of content worldwide." 1 . The availability and increasingly widespread use of the Internet has made it infinitely possible for thousands, if not millions, of users to copy, download, and distribute songs and music, without the knowledge or supervision of the original author. This in turn makes it infinitely impossible for the authors to control the use of their material once it is out of their hands. The problem with this is that it may lead to a reluctance to create such works due to being unable to fully exploit it once created. The Internet is also fast-paced and uses rapidly advancing levels of technology, of which the governing laws are having increasing difficulty keeping up with. The Directive was therefore an attempt at resolving. It manages to promote some level of standardisation within the EU regarding copyright and related rights. ...read more.

However, the exposure provided on the Internet has meant that the popularity of particular artists has soared, not because of the legal advertising and marketing efforts of their management, but rather the illegal dissemination of information and music available on the Internet. For example, the rise of pop star, Eminem was seen to be a result of the mass of information about him and the volume of downloadable music created by him. It seems that the stars who are most hit by free downloads are the 'mega superstars' such as Celine Dion, whereas the vast majority of musical copyright owners are actually helped by the music available on the Internet. Ipsos-Reid found, in a recent survey, that 84% of people using the Internet for these purposes, are also listening to song clips, reading about lyrics and tour information, and researching bands prior to actually purchasing their CD. 47% of these individuals indicate that they have subsequently purchased a CD from a band or artist, solely because of something they first read or listened to on the Internet. 29% indicate that their typically preferred genre of music has changed since the inception of their downloading behaviours and 21% report that their radio listening activities have also changed since they began downloading. Instat-MDR estimates that on-line music revenues are expected to grow at a compound annual growth rate of 33.4% between 2001 and 2006, while revenue from downloading and streaming are expected to remain less than 10% of total revenues through the year 2004 8. Based on these findings, the artists are receiving income indirectly from the free downloads because the users are subsequently purchasing the CD's, giving them increased sales through mass exposure. Therefore, since they are being compensated for their efforts in producing this work, the free downloads and their providers should fall within the exemption in Article 5, paragraph 3 which states that private use should be allowed only if the author is fairly compensated. ...read more.

A slower convergence of laws could then take place. When looking at balancing the opposing rights, care should be taken to ensure that neither party is seen as being the one who is favoured. If the Internet users are seen as being favoured, the copyright owners will have less incentive to continue creating their works and further abuses over the Internet may take place if the law is regarded as being 'too soft'. If the copyright holders are seen as being favoured, the Internet users will feel that they have been 'hard done by' and will refuse to police the Internet as they will be the only ones who will know who is doing the infringing and how to deal with this. The matter itself however, should be kept in context and must not be seen as being totally out of hand. Despite the number of unauthorised downloads that take place every year, there is a much higher percentage of people lawfully downloading for completely legitimate reasons. This must not be forgotten. A final point to note would be that once a global system of governance is put into place, it would have to be enforced on a global scale. Rather than trying defendants in their own country's or in the country's where the infringement took place, they should be tried in a completely neutral place, for example, a separate court set up to deal exclusively with Internet related law. Since the Internet itself has no physical boundaries, the law's governing it should not have physical boundaries either. Intellectual property is completely different in the way it behaves than physical property and should therefore be treated accordingly. Remoaldo, P (June 1998), Copyright Infringement, Law and Borders on the Internet, Portugal Citation not found Description and explanation of cryptography found in: Midge, J. T. J. (21 August 2002), Critique of the Proposed UK Implementation of the EU Copyright Directive <uk.eurorights.org> As in footnote 7 above Metro-Goldwyn Mayer v Grokster Rosen, H (28 February 2002) Letter to the Honourable Rick Boucher (Congressman). ...read more.