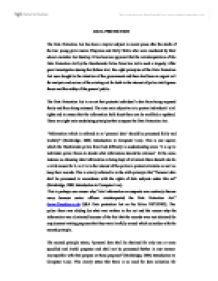 DATA PROTECTION The Data Protection Act has been a topical subject in recent press after the death of the two young girls Jessica Chapman and Holly Wells who were murdered by their school caretaker Ian Huntley. It has become apparent that the misinterpretation of the Data Protection Act by the Humberside Police force has led to such a tragedy. After great investigation during the Soham trial, the eight principles of the Data Protection Act were bought to the attention of the government and there had been an urgent call for analysis and review of the existing act for both in the interest of police intelligence forces and the safety of the general public. The Data Protection Act is an act that protects individual's data from being exposed freely and from being misused. The acts main objective is to protect individuals' civil rights and to ensure that the information held about them can be rectified or updated. There are eight main underlying principles that compose the Data Protection Act. "Information which is referred to as 'personal data' should be processed fairly and lawfully" (Bainbridge, 2000, Introduction to Computer Law). This is one aspect, which the Humberside police force had difficulty in understanding since 'it is up to individual police forces to decide what information should be retained.' At the same instance as choosing what information is being kept of criminals there should also be a valid reason for it, as it is in the interest of the police to protect criminals as well as keep their records. ...read more.

(Bainbridge, 2000, Introduction to Computer Law) "A balance must be struck.... protect public from crime" (www.Guardian.co.uk Q&A Data protection Act an the Police 18/12/2003). If personal data of Ian Huntley was 'adequate' enough to cause injury and relevant to the safety of the society then the previous allegations should have been retained and precautions should have been taken towards him; although the originality of the information was not gathered for the purpose of vetting he was clearly a threat to the Humberside community. There obviously had been severe confusion about the information that Huntley had presented to the police officers and there had been an element of police misinterpretation and wrong human judgement. This led to poor police intelligence and awareness and the failure of storing both his surnames of 'Nixon' and 'Huntley' as one. Not only was this an error but 'one member of staff...wrong date of birth of Huntley' (www.bbc.co.uk Police chief admits Dec 2003) "Personal data shall be accurate and, where necessary, kept up to date" (Bainbridge, 2000, Introduction to Computer Law) then surely the previous allegations should have been collected and kept up to date on the criminal records database. It has become apparent that the reason for information not being kept up to date was due to "the backlog of un-entered case results and the absence of strategic prioritisation" (www.bbc.co.uk 18/12/2003) this initially meant that there was no strategy as to what information needed to be kept and updated and what information needed to be eliminated from being stored for a further period of time as necessary. ...read more.

Referring back to the quotation in question, it seems as though if the police had "Deleted all the information regarding Huntley from our data files because of the Data Protection Act requirements..." then how were still 'retained on magnetic tape' it remains a mystery and that even though the information was available through another source how could the Data Protection Act be misinterpreted remains unquestionable. The eighth principle did not appear to be an issue in the case of the Huntley. This principle would have only applied if Huntley were to escape or leave the country and therefore he would be a risk in another country. The Data Protection Act has been a central source of blame during the Soham trial. It is evident that the Data Protection Act is a 'cumbersome and inelegant piece of legislation' with no guidelines to explain what information is required for retention and for what length of time. In hindsight it is easy to claim that there is a need for common logic application in order to comply with the piece of legislation however, understanding the law in its correct format lies beyond human judgment in such critical cases. To discourage such situations from re-occurring the information commissioner should most definitely consider sending all police administration staff on training and ensure that there is almost a correct way of making an intuitive judgment on collecting and storing information. ...read more.