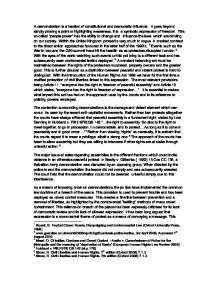 A demonstration is a bastion of constitutional and democratic influence. It goes beyond simply proving a point or highlighting awareness, it is a symbolic expression of freedom. This so called "people power" has the ability to change and influence the laws which are binding on our society. Within the United Kingdom protest is very much in vogue. A marked contrast to the direct action approaches favoured in the latter half of the 1990's.1 Events such as the War in Iraq and the G20 summit have hit the headlines as protestors disrupted London.2 With the eyes of the world watching such events unfold policing is a different task and has subsequently seen controversial tactics deployed.3 A constant balancing act must be maintained between the rights of the protesters to protest, property owners and the greater good. This is further clouded as a distinction between peaceful and violent protest is hard to distinguish. With the introduction of the Human Rights Act 1998 we have for the first time a codified protection of civil liberties linked to this expression. The most relevant provisions being Article 11, "everyone has the right to freedom of peaceful assembly" and Article 10 which states, "everyone has the right to freedom of expression..." ...read more.

163 J.P. 789, to refer to a "constitutional shift."9 Sedley LJ was anticipating the certainties that the HRA would define via the defined expression granted under the breach of the peace. The articles provisions guaranteed a benchmark standard; this would depart from the heavy focus on public order which is constrictive to rights under the breach of the peace. The anticipated "shift" was evident since the subsequent introduction of the HRA as was seen in the case of Laporte v. Chief Constable of Gloucestershire [2006] UKHL 55, [2007] 2 W.L.R 46.10 This case is now the authority regarding breach of the peace powers. It is important to review this case before looking retrospect at the development pre-HRA, in previous judicial rulings. The facts of Laporte centre on a lady travelling via a bus to a planned protest against the war in Iraq. As the police feared that some of the party were planning violence the buses were ordered to return. The previous view was under breach of the peace preventative steps could be taken if reasonable, even in the light of breaches which were not imminent. The House of Lords affirmed the provision of article 10 and 11 of the HRA and stated that imminent breaches must be apparent before any action can be used which contravenes articles 10 and 11. ...read more.