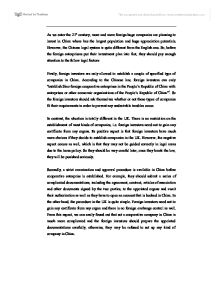 Differences between the Chinese and British Legal systems in respect to forign investement.

As we enter the 21st century, more and more foreign huge companies are planning to invest in China where has the largest population and huge appreciation potentials. However, the Chinese legal system is quite different from the English one. So, before the foreign enterprisers put their investment plan into fact, they should pay enough attention to the follow legal factors: Firstly, foreign investors are only allowed to establish a couple of specified type of companies in China. According to the Chinese law, foreign investors can only "establish Sino-foreign cooperative enterprises in the People's Republic of China with enterprises or other economic organizations of the People's Republic of China"i. So the foreign investors should ask themselves whether or not these types of companies fit their requirements in order to prevent any undesirable troubles occur. In contrast, the situation is totally different in the UK. There is no restriction on the establishment of most kinds of companies, i.e. foreign investors need not to gain any certificate from any organs. ...read more.

One is "Agreements with a large number of countries restricting trade in steel products"ii and the other one is "Agreements under the Multi-Fibre Agreement affecting textile and clothing imports from countries with low labour costs."iii Similarly, Chinese government also protects its weak industries, such as primary products, movie industry and so forth. The investors should be very careful when they want to set foot in these restricted industries. Once they break the rule, they will be trapped into troubles, i.e. "the industrial and commercial administrative organ can order it to cease operation or even evoke its business license."iv Generally speaking, I believe that it is a good policy because it can successfully protect the weak national industries in order to guarantee the smooth increase of overall economy. So the foreign investors are highly supposed to negotiated with experienced Chinese investment advisors about this topic in details and then make their investment plan. Next, I would like to argue the differences of foreign investors' benefits between China and the UK. ...read more.

Then, in some particular circumstance, it may seriously undermine the Chinese economy. For example, most of the Chinese telecommunication industry is controlled by the China Telecom nowadays and it is a little bit difficult for the other small telecommunication company to survive, such as China Unicom and Railcomnet. So when the foreign investor plans to set foot in China, they should analyse the current and future situation carefully. In fact, there are some other important differences in legal aspect of business environment between China and the UK and both of the two governments change their policies to foreign investment continuously. For example, Chinese government will publish an anti-monopoly act soon as well as the foreign investment act will be partially modified this year. So, try to keep the step with the latest news is the most important thing for the foreign investors to do nowadays. All in all, from what I discussed above, we may safely arrive at the conclusion that the legal aspect of Chinese business environment is quite different from the British one. However, if foreign investor could follow the relevant policies, they will enjoy their Chinese adventure and make a considerable amount of profit. ...read more.