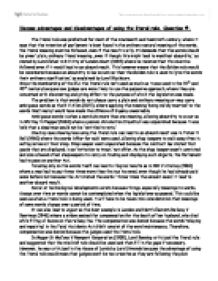 Discuss advantages and disadvantages of using the literal rule. Question . The literal rule was preferred for most of the nineteenth and twentieth century, where it says that the intention of parliamen

Discuss advantages and disadvantages of using the literal rule. Question (c). The literal rule was preferred for most of the nineteenth and twentieth century, where it says that the intention of parliament is best found in the ordinary natural meaning of the words, the literal meaning must be followed, even if the result is silly. It demands that the words should be given ' plain, ordinary literal meaning...even if though this might lead to manifest absurdity,' as stated by Lord Esher in R V City of London Court (1892) where he insisted that this must be followed even if it would lead to an absurd result. This however means that the Golden rule would be considered because an absurdity in law occurs so then the Golden rule is used to 'give the words their ordinary signification,' as explained by Lord Blackburn. Since the membership of the EU, the literal rule isn't used as much as it was used in the 19th and 20th century because now judges are more likely to use the purposive approach, where they are concerned with discovering and giving effect to the purpose of which the legislation was made. The problem is that words do not always carry a plain and ordinary meaning or may carry ambiguous words as the R V Allen (1872), where applying the meaning 'being validly married' to the words 'shall marry' would have made the offence of bigamy unworkable. Ambiguous words is when a word ahs more than one meaning, allowing absurdity to occur as in Whitley V Chappel (1868) where a person did election fraud but was unpunished because it was held that a dead man would not be ' entitled to vote.' One big case showing how using the literal rule can lead to an absurd result was in Fisher V Bell (1960) where the words 'offer for sale' were used, allowing shop keepers to walk away free in selling knives at their shop. ...read more.

Hence the mischief rule can only be used when there is some ambiguity. However, note the clear and unambiguous provisions of the Factories Act, which required the fencing of machines when "in motion". It was held that in Richard Thomas and Baldwins Co. Ltd v. Cummings 1955 that this meant "mechanical propulsion" and excluded being moved by hand. This is a clear breach of Lord Diplock's statement above. Golden Rule It was defined in Grey v. Pearson (1857) 6 HL Cas 1, "the ordinary sense of the words is to be adhered to, unless it would lead to absurdity, when the ordinary sense may be modified to avoid the absurdity but no further." Luke v. I.R.C. 1963 - Lord Reid "It is only where the words are absolutely incapable of a construction that will accord with the apparent intention of the provision and will avoid a wholly unreasonable result that the words of the enactment must prevail." R. v. Allen 1872. It was held that bigamy meant go through ceremony even though the Act provided it was illegal to be married twice, even though the second marriage was void, so they had not literally broken the law. Re Sigsworth 1935, S murdered his mother and tried to claim his inheritance. There is a rule that no-one should profit from their wrong, this overruled a clear statutory right of a son to inherit on intestacy. Hence statutes may be modified on grounds of public policy, as one was in this case (the principle was an existing common law principle that would have applied had she had died having made a will). Although this a clear breach of the rule that clear and unambiguous words cannot be ignored, it surely accorded with Parliament's wishes. In Whiston v. Whiston 1995, public policy reasons prevented someone who had had a bigamous marriage (and was hence void), claiming money that they were clearly statutorily entitled to. ...read more.

Pepper v. Hart means that the will of Parliament will more frequently be followed, thus reinforcing parliamentary supremacy. However, it the inevitable result is increased costs as more research is conducted into Hansard and other sources. Hansard is, of course, not binding on the courts - there is no reason why they should not ignore the intent of Parliament unless it is expressed in a statute. Hansard has the same legal status as any other interpretative aid. The question arises whether Pepper v. Hart affects stare decisis, that is to say whether a court can overrule an otherwise binding case on the basis of Hansard showing that the previous construction was wrong. If this question were to be answered in the affirmative, magistrates courts could overrule the House of Lords. Common sense might suggest that incorrect interpretations should be overruled, but there is the issue of separation of powers - according to the traditional doctrine of the separation of powers the judiciary must be free to reject the Hansard material, since it is nothing more than an interpretative aid, which were it to be binding, would make Parliament both legislator and interpretor: legislation has traditionally been seen as an abstract document not tailored to particular situtations, but rather being a list of abstract principles interpreted and applied in individual cases by the judiciary. Taken this way, to give Hansard such as status would apparently contravene HA Hayek's conception of the rule of law. On the other hand it seems rather futile for Parliament to make laws if the courts are not going to enforce them according to its intention. Other aids Dictionary definitions - this implies a literalist construction of statutes, since a purposive approach would seek to enforce what Parliament intended, rather than enforce the meaning of what it said. Legal textbooks Treaties (e.g. EU treaties), where the law was intended to enact the treaty EU directives ...read more.