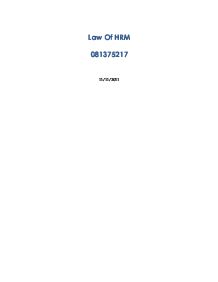 Discuss and analyse the legal concept of protected trade dispute. Explain also whether, in the light of the most recent financial climate (credit crunch, recession, depression), the right to strike is still a persuasive means of protection o

Law Of HRM 081375217 11/11/2011 Discuss and analyse the legal concept of "protected trade dispute". Explain also whether, in the light of the most recent financial climate (credit crunch, recession, depression), the right to strike is still a persuasive means of protection of the employees' rights or, alternatively, other forms of protection could be envisaged at legislative level. A trade union is an organisation of workers that have joined together to reach common goals such as better working conditions or pay rates. A trade union on behalf of its members negotiate with employers, for such things as wages, working safety, unfair dismissals etc. The settlements agreed are binding on members, employers and sometimes non members as well. In the beginning of the formation of trade unions during the early 19th century under law these organisations were seen as illegal, however in 1824 the law was reformed through the Combinations Act 1824- 25 in which the unions themselves were not illegal, as long as they were operating in the 'friendly society' purposes, anything outwith this was more than likely still seen as illegal. Strikes were regarded as a "criminal molestation of the employer." (Pitt, G 2011: p352) 1. Trade unions in 1871 under the Liberal government who introduced the Trade Unions Act and the Criminal Law Amendment Act, were legalised and seen as being ...read more.

Employees must also be treated equally, an employer can not pick and choose who to dismiss, If he did this could lead to a case being brought about through discrimination against the employees who were dismissed. Employees who have been part of a protected trade dispute cannot be forced to take redundancy under (TULR(C)A,ss152(1)-153), which states that it would be classed as unfair dismissal to select a person for redundancy trade union status/activities. If an unfair dismissal claim is successful then there are a host of possibilities that might come from it. Compensation may be awarded and would be calculated by considering a number of things such as the length of employment, their age and their current pay to create a basic award. They may then also be given compensation that is decided entirely by the tribunal taking into account the loss and suffering by the claimant as well as future loss such as pension schemes etc. and may be anything up to the amount of �68,400. Alternatively if the case is still on going and if the employee agrees, the tribunal may also order the employer to re-instate the employee, refusal to do so would incur further compensation to be paid. In the current economic climate the right to strike may not actually be the best means of protection. ...read more.

Although you have attempted to negotiate, it will not be deemed as satisfactory as you have only given them one option, so possibly if you add in more options then there may be a compromise in which you can both come to. As it stands, it is likely that an injunction will be granted to halt your strike actions against Yoko Plc. Another case which backs up my worries about having an injunction brought about against your strike would be that of University College London Hospitals NHS Trust v Unison [1999] ICR 204 University College entered into a contract with a contractor for the purposes of building a hospital. The Union opposed this contractor and tried to force the claimant to use a consortium preferred by them instead. This was denied by the NHS trust and the union threatened to strike, however it was held that the terms and conditions disputed were not relating to the effected employer and an injunction was granted, this applies to you in the sense that the contract disputes are with a prospective employer and not the current employer. Therefore I believe that as it stands if your terms and conditions do not state anything to do with suppliers then unless you provide more alternatives that you should call of the strike, as it is not a legitimate dispute. 1 Pitt, G. (2011). Employment Law. 8th Edition. Sweet & Maxwell. Pp352 ?? ?? ?? ?? ...read more.