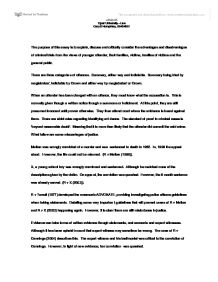 Discuss and critically consider the advantages and disadvantages of criminal trials from the views of younger offender, their families, victims, families of victims and the general public

The purpose of this essay is to explain, discuss and critically consider the advantages and disadvantages of criminal trials from the views of younger offender, their families, victims, families of victims and the general public. There are three categories of offences. Summary, either way and indictable. Summary being tried by magistrates', indictable by Crown and either way by magistrates' or Crown. When an offender has been charged with an offence, they must know what the accusation is. This is normally given though a written notice though a summons or indictment. At this point, they are still presumed innocent until proven otherwise. They then attend court where the evidence is heard against them. There are strict rules regarding identifying evidence. The standard of proof in criminal cases is 'beyond reasonable doubt'. Meaning that it is more than likely that the offender did commit the said crime. What follow are some miscarriages of justice. Matten was wrongly convicted of a murder and was sentenced to death in 1952. In, 1998 the appeal stood. However, the life could not be returned. (R v Mattan (1998)). X, a young school boy was wrongly convinced and sentenced. Although he matched none of the descriptions given by the victim. On appeal, the conviction was quashed. ...read more.

However, in an average sitting of 40 cases in a year. A magistrates' may only trial around 8!. This is due to the majority of guilty pleas and dealing with non payment of fines and bail applications. (Grove (2002)). The judiciary in Youth Courts consists of 2 or 3 magistrates', all specially selected for their experience or expertises in their area and specially facilitated to trail young offenders. The court process in Youth Courts are less formal than adult magistrates', enabling the young defendant to participate in the proceedings and also to protect the welfare of the young person. For these reasons, the public are not permitted to observe in youth courts. Not the approach taken with the Bulger case. When magistrates', judges or members of the jury listens to evidence in any court, there is a mixture of statutes and decision of judges that govern what can and cannot be used as evidence. (Criminal Evidence Act 1989 and Criminal Justice Act 2003). Evidence can be ruled inadmissible and therefore, the full facts not presented to the jury. This is questionable whether a person receives a fair trail if substitutional evidence to either support or defend a prosecution or verdict is left out. (McNamara 1986). A good example here is the case of Sparks v R (1964) ...read more.

There was a large gathering of public hatred, some people even attempted to attack the transport vans. Spectators were chanting and public disorder broke out. The public was thirsty for justice. It is also fair to say that in order to report the news in an interesting and excitable way, some important information or controversy facts may be left out of the report, not amount to a fair review of the case. In conclusion, it is likely that criminal offenders in the UK will receive an unbiased, fair trail. However, this goes without saying that the UK legal system could develop or adopt other approaches that allow the flexibility of rehabilitation as other countries have, such as Norway. Clearly the public and media also plays a part with regards to high profile cases and should be encouraged to review the whole facts before making a quick decision regarding cases. As such, they current system of dealing with younger offenders could stipulate more guidelines regarding what cases to trail and what cases where. It is also clear that prison sentencing is not always effective and alternative dispute resolution may transpire to be more effective and prevent further offending with the correct support systems in operation. Younger offender should be treated differently to adults and support networks in place to see this though. ...read more.