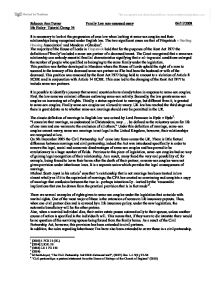 Discuss and explain: a) How same-sex relationships have come to be increasingly recognised under English law; and b) Whether, in your view, the position is now satisfactory.

It is necessary to look at the progression of case law when looking at same-sex couples and their relationships being recognised under English law. The two significant cases are that of Fitzpatrick v Sterling Housing Association1 and Mendoza v Ghaidan2. The majority of the House of Lords in Fitzpatrick held that for the purposes of the Rent Act 1977 the definition of 'family' included a same-sex partner of a deceased tenant. The Court recognized that a same-sex relationship can embody essential familial characteristics signifying that evolving social conditions enlarged the number of people who qualified as belonging to the same family under the legislation. This position was further developed in Mendoza where the House of Lords upheld the right of a man to succeed to the tenancy of his deceased same-sex partner as if he had been the husband or wife of the deceased. This position was reasoned by the Rent Act 1977 being held to amount to a violation of Article 8 ECHR read in conjunction with Article 14 ECHR. This case led to the changing of the Rent Act 1977 to include same-sex partners. It is possible to identify a journey that several countries have already taken in response to same-sex couples. First, the law removes criminal offences outlawing same-sex activity. Secondly, the law grants same-sex couples an increasing set of rights. ...read more.

Also, when a married individual dies, their entire estate passes automatically to their spouse, unless another course of action is specified in the individual's will. This means that, if they were to die intestate there would be no question of the surviving spouse being forced from the family home. As a result of the Civil Partnership Act, however, this provision has been extended to civil partners. In addition, the rules regarding Inheritance Tax have also been extended to cover those in a civil partnership. The key conceptual difference between civil partnerships and marriage is that one is essentially same-sex and the other is essentially opposite-sex, with the corollary that children cannot be conceived naturally by the partners. The practical differences in law relating directly to that physiological difference, namely the absence of provision regarding non-consummation and adultery and, in the usual run of things, the conception of children illustrate how the law is unwilling to accept same-sex relationships to the same degree as marital relationships. In my view, the conception of children is one of the fundamental reasons for marriage and so I agree with the law on disallowing same-sex marriage. Whether it is correct to regard civil partnerships as same-sex marriage depends on whether one regards those aspects of marriage that are the same as civil partnerships- voluntary, permanent, sexual, monogamous, mutually supportive, nurturing of children and probably sexually faithful -as more or less vital to the definition of marriage than the key difference, which is the sex of the persons entering the status. ...read more.

I agree with the decision of the court that civil partnerships are a parallel and equalising institution designed to redress a perceived inequality of treatment of long-term monogamous same-sex relationships, while at the same time demonstrating support for the long established institution of marriage. Marriage is the most sacred institution in this country, and every society considers it the joining of a man and a woman. It makes biological sense since only a man and woman can pro-create. However, the number one reason that heterosexuals marry is not to establish legal status, allow joint filing of taxes, or protect each other in medical decision-making. They marry because it is the ultimate expression of a person's love for another. The incumbent Labour government has stated that they have no plans to legalise same-sex marriage and, in my view the position on same-sex couples is now satisfactory. Same-sex marriage is however supported by the Liberal Democrats and Green Party of England and Wales. There is also a campaign in Scotland to allow same-sex couples to marry in the country. Although England and the Republic of Ireland may not yet be ready to abandon their traditional approach and embrace a right to same-sex marriage under their domestic laws, they may one day have to accept that such a right exists under Article 12 ECHR. This is because 'much of the language in Goodwin v UK12 leaves the door open to acknowledge same-sex marriage at some point in the future'13. ...read more.