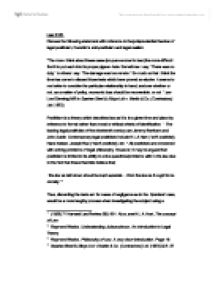 Discuss the following statement with reference to the jurisprudential theories of legal positivism, Dworkin(TM)s anti-positivism and legal realism.

Law 3120. Discuss the following statement with reference to the jurisprudential theories of legal positivism, Dworkin's anti-positivism and legal realism. "The more I think about these cases [on pure economic loss] the more difficult I find it to put each into its proper pigeon-hole. Sometimes I say: 'There was no duty.' In others I say: 'The damage was too remote.' So much so that I think the time has come to discard those tests which have proved so elusive. It seems to me better to consider the particular relationship in hand, and see whether or not, as a matter of policy, economic loss should be recoverable, or not." per Lord Denning MR in Spartan Steel & Alloys Ltd v. Martin & Co. (Contractors) Ltd (1973). Positivism is a theory which describes law as it is in a given time and place by reference to formal rather than moral or ethical criteria of identification.1 The leading legal positivists of the nineteenth century are Jeremy Bentham and John Austin. Contemporary legal positivists include H.L.A Hart ('soft' positivist), Hans Kelsen, Joseph Raz ('hard' positivist), etc .2 All positivists are concerned with solving problems of legal philosophy. However, it may be argued that positivism is limited in its ability to solve questions/problems within the law due to the fact that these theorists believe that; 'the law as laid down should be kept separate...from the law as it ought to be morally.' ...read more.

The Spartan's case: The Spartans19 case makes us think about the idea that the law should not exist in isolation. The criteria each judge uses to identify the law, tells us which jurisprudential theory their arguments are based upon. Edmund Davies: Edmund Davies represents the 'soft' positivists, such as H.L.A. Hart. Indeed, this modern positivist acknowledged that rules cannot clearly cover all situations and using the doctrine of 'open texture'20 stipulated reasons for why discretion was necessary in rare cases. This concept states that; language is indeterminate, rules are general (e.g. fair, just and reasonable in negligence); and precedent can be narrowed or widened.21 However, according to the positivists, morality is only relevant when already incorporated into the law itself.22 When the law runs out, judges will use their discretion but this is very rare. Edmund Davies uses a common law precedent I.e. the case of S.C.M. Ltd23 (in favour of the plaintiff's), as a binding authority for the following proposition: '...The three heads of damage are the physical damage to the metal which it is conceded to be recoverable, the consequential economic loss of profit from that damage; and the pure economic loss due to there being no electricity to carry out the further melts....'24 Lord Denning : Lord Denning, to a certain extent, represents the anti-positivist stance as seen in the studies of Dworkin. ...read more.

The theorist, Leiter, stated that, in deciding cases; '...judges respond primarily to the stimulus of the facts, rather than to legal rules and reasons...' (the 'core claim').47 Karl Llewellyn states that to resolve disputes reasonably, is the business of law and the judges, lawyers etc and; '...what these officials do about disputes is, to my mind, the law itself....'48 Within the common law, Llwelleyn believes that the practice of law is a craft consisting of a grand style and formal style of judicial opinions.49 The grand style is 'the style of reason' which is informed by policy considerations, whilst the formal style is logical and formal and seeks refuge in rules of law.50 Llwelleyn prefers grand style and believes that it is necessary for the '...demands of justice...'51 Llewellyn believes that the result of a case is to be judged by reference to whether it is; 'something which can be hoped, or thought, to look reasonable to any thinking man'.52 To Conclude, from the realists' point of view, it is necessary to abandon the tests in negligence (as suggested by Lord Denning) and instead, look to the facts of any given case, and the nature of relationships, and each individual case ought to be judged on its own merit Finally, realists' argue that judges do not reach their decisions in a formalist way by applying rules, principles and concepts to the facts. They see the legal process as a rationalisation of a result. ...read more.