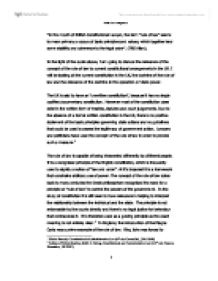 "In the mouth of British Constitutional Lawyer, the term "rule of law" seems to mean primary a corpus of basic principles and values, which together lend some stability and coherence to the legal order". (TRS Allan). In the light of the quote above, I am going to discuss the relevance of the concept of the rule of law to current constitutional arrangements in the UK. I will be looking at the current constitution in the UK, the doctrine of the rule of law and the relevance of the doctrine in the operation of state power. The UK is said to have an "unwritten constitution", because it has no single codified documentary constitution. However most of the constitution does exist in the written form of treaties, statutes and court judgements. Due to the absence of a formal written constitution in the UK, there is no positive statement of the basic principles governing state actions and no guidelines that could be used to assess the legitimacy of government action. Lawyers and politicians have used the concept of the rule of law in order to provide such a measure.1 The rule of law is capable of being interpreted differently by different people. It is a recognised principle of the English constitution, which is frequently used to signify a notion of "law and order". ...read more.

By the rule of law, all laws should be clear and open. In Merkur Island Shipping Corpn v Laughton12 1983, Lord Diplock stated "absence of clarity... encourage those who wish to undermine" the rule of law. The source of power has to be pointed out according to the courts. Referring to the first factor of Dicey's rule of law he mentions powers, this poses a problem when trying to define the powers. An example of this can be seen when trying to define 'arbitrary power' it could be interpreted to mean a power that can be abused if it is not protected by adequate controls and checks. Also it could be interpreted to mean powers that have a direct impact upon individual rights. A case that expounds this is Liversidge v Anderson13 [1942] where the home secretary assumed he had the belief that a detention without warrant was justified. If the first definition of arbitrary powers were used then the rule of law would not apply to our constitution, which is reliant on delegation, arbitration and control through report and review. The rule of law does in fact apply to every modern democratic constitution, but just in slightly different ways. Sir Ivor Jennings a prominent critic of Dicey, mentioned a weakness of his definition, "they (Dicey etc) ...read more.

Although he does say decisions should be made in accordance to procedural fairness, he is more concerned about regular enforcement and application rather then content. Writers have now began to expand the concept by including these issues (Delhi Declaration 1959).20 In conclusion complying with the rule of law may provide a check on abuse of power. It may provide a critical evaluation of how the power is used. Alone it is not a comprehensive code but must be used alongside other principles, which regulate the content of the legal rules. It can be argued that the rule of law is too vague, if the law is written down on paper it would be more accessible and easier to understand and obey. On the other side codification would require unnecessary money, time and effort what is the point on devising a remedy for something that works in the first place? Finally there are many interpretations of the doctrine of the rule of law, each having slightly different connotations. We all put into practice the principles of law everyday so we do have a basic idea what the law entails. Dicey's principle of the rule archaic, the general principle is still intact and forms part of the British Constitution today. It's the upholding of morality, faith and reasoning in the judiciary that gives the rule its eternal constitutional relevance rather than written rules. ...read more.

A very well structured essay. The points are thought out carefully. A greater emphasis on current examples would improve the grade.