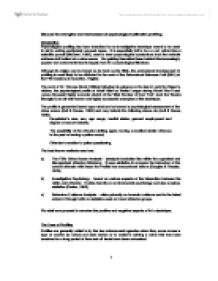 Discuss the strengths and weaknesses of psychological (offender) profiling.

Discuss the strengths and weaknesses of psychological (offender) profiling Introduction Psychological profiling has been described as an investigative technique meant to be used to aid in solving particularly unusual cases. It is essentially felt to be an art, rather than a scientific pursuit (McCann, 1992), used to draw psychological conclusions from the material evidence left behind at a crime scene. The guiding theoretical base behind this increasingly popular but controversial tool is largely from the psychological literature. Although its origins can be traced as far back as the Bible, the professional development of profiling is most likely to be attributed to the work of the Behavioural Sciences Unit (BSU) at the FBI Academy in Quantico, Virginia. The work of Dr. Thomas Bond (1880s) following his autopsy on the last of Jack the Ripper's victims, the psychological profile of Adolf Hitler by Walter Langer during World War II and James Brussels' highly accurate sketch of the 'Mad Bomber of New York' (and the 'Boston Strangler') are all well-known and highly successful examples of this technique. The profile is generated based upon what can be termed a psychological assessment of the crime scene (Ault & Reese, 1980) and may include the following elements (Ault & Reese, 1980): Perpetrator's race, sex, age range, marital status, general employment and degree of sexual maturity; The possibility of the offender striking again, having committed similar offences in the past or having a police record; Offender's reaction to police questioning. The best known methods used are: a) The FBI's Crime Scene Analysis - principal foundation lies within the organised and disorganised offender dichotomy. It uses statistics to compare the behaviour of the current offender with those the Profiler has encountered before (Douglas & Ressler, 1978). b) Investigative Psychology - based on various aspects of the interaction between the victim and offender. It relies heavily on environmental psychology and also employs statistics (Canter, 1985). ...read more.

Just because a field is in its infancy does not mean it is not useful. The field is attempting to become more science than art by: Development of a Crime Classification manual (Douglas et al, 1992) to operationalise the underlying concepts in a comprehensive and practical format. Encouraging research in the area to try and address 'what determines if profiling is beneficial to crime investigations or not' as different agencies involved having differing perspectives leading to confusion. Enhancing the use of rigorous statistical tools and analysis such as Chi Squared Automated Interaction Design (CHAID) to analyse data and display links graphically (Magidson, 1993) and computerised programs. Proposing to introduce standardisations, regulations and strict guidelines for those professionals intending to train and practice in this field. In conclusion, profiling appears to have merits in certain cases but much more research and standardisation is needed to substantiate its continued use and its future appears unclear until this happens. It is said that victims of crime have had, at best, a marginal influence on Criminal Justice. Do you agree? Introduction In the nineteenth century, prior to the establishment of a national police force and a formal Criminal Justice system, the victim had a crucial role in initiating criminal prosecution when a crime was committed. In more recent times, the victim still has the legal right to bring a prosecution but the system on the whole is more geared towards the official agencies dealing with crime. As a result of this, it has often been stated, in the last fifty years that victims were the forgotten element in the Criminal Justice process.Why? * Victims' Experiences Throughout the 1960s and much of the 1970s, the majority of criminological research restricted their focus to offenders and largely ignored the plight of victims. Subsequently, a number of studies conducted in the 1970s and 1980s (including the British Crime Survey) revealed that victims were significantly affected by their experiences and often dissatisfied with many aspects of their encounters with Criminal Justice Agencies (Maguire & Pointing, 1988). ...read more.

'The Witness Service' run by Victim Support (1990) not only provides advice, information and support, it also campaigns for better facilities and special provisions for vulnerable groups. One radical response to help victims was the proposal that a fundamental review of the adversarial process should be undertaken to make it easier to prosecute victims. However in the meantime views have been put forth for victims to have a greater involvement in the sentencing process. In 1995, victim statements were introduced on a pilot basis to facilitate more informed decision-making by professionals by taking into account victims' interests and views. The introduction of mediation schemes (1970s) and reparative justice attempts to redress the balance and strengthen the right of the victim to 'seek recompense for harms suffered' (Christie, 1977; Ashworth, 1986; Wright, 1991). * Compensation Following the Criminal Injuries Compensation Act 1995, a new system of financial compensation came into force and dealt with fines according to the nature of injury. Conclusion Overall, although it is evident that without the co-operation of the victim in reporting crime, furnishing evidence, identifying the offender and acting as a witness in court, most crime would remain unknown and unpunished, victims had received very little recognition or attention until the last two decades. The last 2-3 decades have seen monumental measures to rectify this. However, it must be borne in mind that measures like the Victims Charter and other charters have no legal status and their role is 'perhaps best seen as a statement of interest rather than providing justifiable rights' (Fenwick, 1995). Also, the response in the UK to meeting the needs of victims has focused rather narrowly on providing support and services for the victim along with some financial compensation without endeavouring major changes in the judicial system. Thus, it is obvious that despite all the measures outlined, a lot more needs to be accomplished to strengthen the position of the victim in the Criminal Justice system in the UK. ...read more.