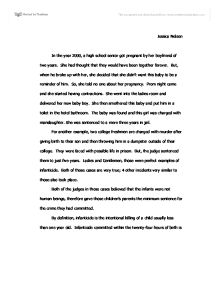 Jessica Nelson In the year 2000, a high school senior got pregnant by her boyfriend of two years. She had thought that they would have been together forever. But, when he broke up with her, she decided that she didn't want this baby to be a reminder of him. So, she told no one about her pregnancy. Prom night came and she started having contractions. She went into the ladies room and delivered her new baby boy. She then smothered this baby and put him in a toilet in the hotel bathroom. The baby was found and this girl was charged with manslaughter. She was sentenced to a mere three years in jail. For another example, two college freshmen are charged with murder after giving birth to their son and then throwing him in a dumpster outside of their college. They were faced with possible life in prison. But, the judge sentenced them to just five years. Ladies and Gentlemen, those were perfect examples of infanticide. Both of those cases are very true; 4 other incidents very similar to those also took place. ...read more.

altruistic infanticide: the killing of a child to relieve the child of pain or suffering; 2) acutely psychotic infanticide: in which the child is killed while the parents are suffering severe mental illness; 3) accidental infanticide: when the death is accidental; 4) spousal revenge infanticide: where one parent kills the child to get back at the other parent; 5) unwanted child infanticide: where the child is not wanted. Here in the United States, the most common reason for committing infanticide is simple; parents just don't want their own child. These deaths usually occur by drowning, strangulation, suffocation, or abandonment. Although this practice is against the law in the civilized world, this crime against infants is still strongly practiced in the United States. In 1999, the number of children put to death by means of infanticide was 362. In the year 2001, that number was 403. That number increased by 17 (%) percent in just over two years. According to Professor Peter Singer of Princeton University, "Killing an infant is not morally equivalent to killing a person, sometimes it is not wrong at all." ...read more.

People who are pro-choice use these arguments to support partial-birth abortions saying that it is for the good of science. Is scientific research really worth it at the cost of another human life? Out of the 51 states in this country, 23 of them have banned partial-birth abortion. That means that 28 states believe that it is all right to kill a child while coming out of the birth canal. 28 states is over half of the states in this country; where we are guaranteed life, liberty, and the pursuit of happiness. In 1995, former President Bill Clinton vetoed a bill banning partial-birth abortions in this country. Another bill to ban partial-birth abortion was presented in 1997. Former President Clinton vetoed that as well. Both of those bills passed in both the senate and the house. People believe that by allowing abortion, infanticide will cease to exist. I leave you with this question: With abortion, why should a tolerance for ending human life under one set of limited conditions necessarily lead to an acceptance of ending human life under other, broader, terms? We all know and realize that infanticide is wrong, so what are we going to do about it? Thank you. ...read more.