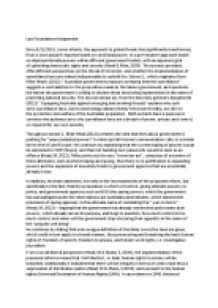 ﻿Law Foundations Assignment Since 9/11/2001, terror attacks, the approach to global threats has significantly transformed, from a once passive response based on race/land/power, to a pre-emptive approach based on disproportionate powers within different government bodies, with an apparent goal of upholding democratic rights and security (Head & Man, 2009). The extracts provided, offer different perspectives on the threat of terrorism, and whether the implementation of surveillance laws are indeed indispensable to uphold the. Extract 1, which originates from Mike Head?s (2012) ? Australian government proposes sweeping Internet surveillance? suggests a contradiction to the proposition made by the labour government, and questions the extent the government is willing to declare these laws being implemented in the name of protecting national security. The second extract (2), from the Attorney-general?s department (2012) ? Equipping Australia against emerging and evolving threats? explains why such strict surveillance laws, due to (technology advancement/ terrorism threats), are dire to the protection and welfare of the Australian population. Both extracts have a purpose to convince the audience as to why surveillance laws are a breach of power, privacy and control, or required for our own security. Throughout extract 1, Mike Head (2012) ...read more.

This form of fallacy is known as the red herring. Additionally the statements made in regards to the GFC still having occurring ramifications on the Australian economy, do have premise, however in accordance to the IMF (SMH, 2012), Australia?s economy is one of the strongest. Moreover the insinuation that the Gillard government is depriving Australians of work, or welfare, due to proposing an injection of cash into this reform again begs to question. Similarly there are a number of fallacies that can be found within extract 2. The ?slippery slope? fallacy is one of the most prominent throughout this extract?. This fallacy comprises when the conclusion of an argument rests upon the chain reaction, and there is not sufficient reason to think that the chain reaction will actually take place (Head, M & Mann, S, 2009). A specific statement made ?Attorney Generals Department?, states ? the absence of action, significant intelligence and evidence collection capabilities will be lost providing criminal elements with a technological upper hand?. The assumed correlation is not ample enough to demonstrate a chain reaction, for example, if these proposed laws are not put in action, there is no irrefutable proof that insists that intelligence and evidence capabilities will be lost, which in turn will put all Australian citizens under threat. ...read more.

of being not a customer or equal citizen, which steams from the fundamental principle of a free society under the rule of law (Head, M & Mann, S, 2009), because we have to be treated equally in equal circumstances. Moreover because the capacity to speak freely about any kinds of matters ? personal, religious, political, will be spied upon, it will create a constrained society, which in turn will be controlled by different sects of the government, which means fundamental human rights will be constrained or diminished, which essentially is indicative of democracy being threatened. Conclusively without sound justification as to why the laws that already exist need expansion, validation of the proposed implementation cannot be warranted to protect Australians, but instead it exploits the natural right to privacy and in some cases work/ freedom of speech of Australians. Socialists such as Mike Head believe that these propositions are disguised in allowing unprecedented powers. However General Attorney?s department through taking a utilitarian standpoint, insist that achieving the greatest good for the greatest happiness (which in this case is security). Nonetheless these proposals not only act as a threat to freedom of privacy under the human Rights declaration, but also allowing unprecedented powers and economic resources, in what seems to gain excessive control. ...read more.