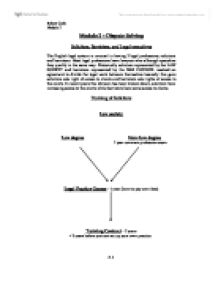 Module 2 - Dispute Solving Solicitors, Barristers, and Legal executives The English legal system is unusual in having 2 legal professions; solicitors and barristers. Most legal professions have lawyers who although specialise they qualify in the same way. Historically solicitors represented by the LAW SOCIETY and barristers represented by the BAR COUNCIL reached an agreement to divide the legal work between themselves basically this gave solicitors sole right of access to clients and barristers sole rights of access to the courts. In recent years this division has been broken down, solicitors have increasing access to the courts while barristers have some access to clients. Training of Solicitors Law society Law degree Non-Law degree 1 year common profession exam Legal Practice Course - 1 year (have to pay own fees) Training Contract - 2 years + 3 years before you can set up your own practice Bar Council Law Degree Non-Law degree 1 year common profession exam Inns of Court Grays Lincons Middle Temple Inner Temple All based in London Bar Vocational Exam 1 year 18 Dinners Get 2 barristers to take you on Pupilage 1 year 6 months with each barrister. First 6 months was unpaid, but not set at national minimum rate. 2nd 6 months is paid at national minimum rate Can stay for longer than 1 year but will still only receive same rate of pay Called to 'Bar' to receive certificate 2 types of barrister; Junior and QC Chambers Must get into chambers within 3 years of leaving Pupilage or you are time barred and will never be able to become a practicing barrister QC = Queens Council (silks) - Have to be a junior for at least 10 years and are chosen by the bar council (can't ask to be one) Bar council opened 9 regional centres and 12 dinners need only to be taken Typical work of a solicitor 1. ...read more.

How accurate is the electoral register? * Younger generations are far more likely to move residence than those who have mortgages * Some exclude themselves from it because the link between electoral and taxation * Ethnic minorities do not register for the results of doing so. 2. Random selection may produce racial bias 3. Random Selection may produce gender bias 4. Although the system is vetted, a large number are still becoming jurors - 1 in 25 is a disqualified juror * These who get through also tend to become foremen who influence the jury's decision * Snarebrook Crown Court 15 previous convictions and knew he was disqualified sat on 3 trails, on 2 he was foreman, once caught he said unless a paedophile they are innocent 5. Excusals * The majority are woman whom get excusals - childcare The role of the jury The judge is there for matters of law whereas the jury is there for matters of fact. On matters of law the judge can acquit. However, the judge cannot tell the jury to reach any verdict. He can say "if guilty it must be beyond all reasonable doubt" judge always asks for an anonymous verdict From 1967 (made law 1974) the majority verdict came to force. After 2 hours (minimum) the judge must redirect by saying he will accept a majority verdict of 10-2 or 9-1. Once a majority decision has come to force the foreman must say in court to the judge the actual numbers of the majority verdict Pigg 1983 - the foreman came back and said they had reached a majority verdict of 10 and the judge accepted it. On appeal the conviction stood. The process of reaching this decision is completely covered by the contempt of court act 1987. If they cannot reach a decision the judge will ultimately dismiss the jury at his discretion. The CPS can then retrial the case meaning the new jury will be introduced. ...read more.

Their extensive use The social security tribunal for example hears 10,000+ cases per year, cases which otherwise would have to be heard in a court of law. 2. The cost of tribunals Tribunal's costs are much lower than court costs. There is no need for representation; however, statistics suggest that people who use a lawyer in a tribunal have around a 50% chance of winning while people without representatives have about a 30% chance. 3. The speed Generally tribunal cases are much quicker to be heard than cases in the courts. However, under the new fast track arrangements where by cases should go to court within 30 weeks tribunals now enjoy less of an advantage. 4. Simple procedures This is particularly useful for individuals bringing their own cases who can not afford legal representation. However, as mentioned above the success rate for these people is low. 5. Tribunals become experts As they deal with a very limited area of law. E.g. Employment, the chairman and the 2 lay members become very expert in this field. Disadvantages of tribunals 1. Lack of legal aid Individuals who can pay for representatives enjoy a distinct advantage 2. Limited rights of appeal Some tribunals do not need to publish the reasons for their decision which makes appeals virtually impossible. Some tribunals don't have rights of appeal at all. Whilst the ones that do (E.g. Immigration, Social security, and mental health) have far fewer rights than cases heard in court. 3. Unlike the courts tribunals do not operate a system of strict judicial precedent This means that compared to a court case, the outcome of a tribunal is far more difficult to predict. This means that legal advice is difficult to obtain and so less cases are settled outside the tribunal. 4. Tribunals are less respected than the courts This means that parties are less likely to accept the decisions of a tribunal and it is far more difficult to take action to get the decision enforced. End of Module 2 Started on 08th January 2002 Finished on 19th March 2002 Robert Cook Module 2 P. 1 ...read more.