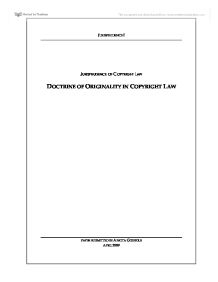 Doctrine of Originality in IPR

JURISPRUDENCE I JURISPRUDENCE OF COPYRIGHT LAW DOCTRINE OF ORIGINALITY IN COPYRIGHT LAW PAPER SUBMITTED BY ANKITA GODBOLE APRIL 2009 INTRODUCTION "Copyright shall subsist in...original literary, dramatic musical and artistic works."1 T he fundamental premises on which copyright law is based is originality.2 The question that a court must thus ask itself when assessing copyright claims is whether the work being examined is 'original'. However, the exact meaning of the term 'original' and what exactly 'originality' entails remains a rather nebulous concept. The enquiry into whether or not a work can be called original enough to render it suitable for copyright protection, has devolved into the narrow point of whether it has satisfied the required 'standard/quantum of originality'.3 Divergent interpretations placed by various courts on the required quantum have left the jurisprudence on the point in a quagmire. Recent decisions by the Indian courts providing their version of the same have only served in augmenting the confusion. This research paper endeavours firstly, to locate the Indian judiciary's formulation of the standard of originality within those giving by other jurisdictions, and secondly to determine whether there is a need for reconsidering the same given its ramifications on copyright jurisprudence in India. Applying a case law analysis method, the paper first traces the various interpretations laid by courts on the quantum of originality and then proceeds to examine the same as laid down by the Indian Courts in Eastern Book Company v. D.B. Modak4 [hereinafter "EBC"], Mattle Inc. v. Jayant Agarwalla5 [hereinafter "Mattle"] and The Chancellor, Masters & Scholars of the University of Oxford v. Narendra Publishing House6 [hereinafter "Oxford"]. Within this framework, the final task has been to carry out a critical analysis of the interpretation of originality in the abovementioned decisions and determine their implications on future copyright jurisprudence in India The paper determines that while the standard as laid down in Mattle can be retained, certain aspects of the same need to be clarified by a superior bench. ...read more.

that the work was not sufficiently original.26 However, it is submitted that the above decision is open to considerable debate given the manner in which the Judge very "eloquently" expressed what he believed to be the correct and applicable standard of originality. Acknowledging that a previous Supreme Court judgment given in EBC27 had correctly adopted and applied the CCH standard, the learned Judge said, "Our law mandates that not every effort or industry...results in copyrightable work, but only those which create works that...involve some intellectual effort and involves a certain degree of creativity."28 (emphasis added) A similar standard was applied by Justice Bhatt in a subsequent case, The Chancellor, Masters & Scholars of the University of Oxford v. Narendra Publishing House which involved an unsuccessful copyright claim in a set of mathematics textbooks published by the plaintiffs. While it is submitted with some relief that the Delhi High Court did not formulate an entirely independent standard of originality, it still succeeded in intensifying the confusion around the same by combining rather ineptly two previously existing and apparently distinct formulations. Justice Ravindra Bhatt's assessment has the potential to become the settled position of law with respect to originality in India. While he has carried out an admirable discussion of the jurisprudence on the point in the case, his interpretation is not without its drawbacks. If at all Mattle is to become precedent, then it is imperative that the possible lacunae in the ratio be plugged. In an attempt to do the same the discussion that now follows seeks firstly to determine what the position in India on standard of originality is and secondly whether such the position is desirable given its possible future implications. It is submitted that rather than adopt a pure CCH standard, the formulation as given in Mattle seems to be a fusion of Feist and CCH. It certainly incorporates the requirement of creativity which is purely a Feist stipulation. ...read more.

The Court in Feist makes a distinction between the facts themselves and the manner in which they are marshaled and represented. While it clearly said that facts themselves are obviously not subject to copyright, it further sought to indicate that any equally mundane representation of them which is "so mechanical or routine as to require no creativity whatsoever" does not possess the required minimal degree of creativity. Hence it stands to reason that the word 'creative' does not correspond to its dictionary meaning of 'unique or novel' but is a much lower standard. See Howard Abrams, "Originality and Creativity in Copyright Law"; Supra note 17, at 16 - 17. 20CCH Canadian Ltd. v. Law Society of Upper Canada, 2004 SCC 13. 21Supra note 20, at paragraph 24. 22Teresa Sccasa, "Recalibrating Copyright Law?: A Comment on the Supreme Court of Canada's Decision in CCH Canadian Ltd. v. Law Society of Upper Canada", Canadian Journal of Law & Technology 89, 90 sourced from http://cjlt.dal.ca/vol3_no2/pdfarticles/scassa.pdf (visited on March 17, 2009). 23Supra note 22, at 91. 24Supra note 22, at 91. 25Supra note 5, at paragraph 9. 26Apart from not having met the required standard of originality the Court went on to hold that the copyright claim was defeated by the doctrine of merger. For a discussion See Mattle Inc. v. Jayant Agarwalla, Supra note 5, at paragraph 27. 27In a claim for copyright infringement by the appellants of their law report - Supreme Court Cases, the court has to consider whether the said compilation of judgments were original. Answering the question in the affirmative P.P. Naolekar, J. speaking for the bench adopted the test laid down in CCH that the work must be original "in the sense that by virtue of selection, coordination or arrangement of pre-existing data contained in the work, a work somewhat different in character is produced by the author." 28Supra note 5, at paragraph 27. ?? ?? ?? ?? II YEAR TRIMESTER VI JURISPRUDENCE OF COPYRIGHT LAW - DOCTRINE OF ORIGINALITY 7 NATIONAL LAW SCHOOL OF INDIA UNIVERSITY ...read more.