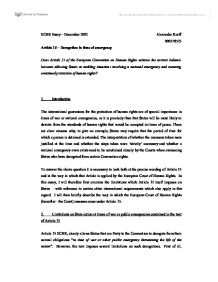 Does Article 15 of the European Convention on Human Rights achieve the correct balance between allowing States to tackling situations involving a national emergency and ensuring continued protection of human rights?

ECHR Essay - December 2002 Alexander Korff 000378523 Article 15 - Derogation in time of emergency Does Article 15 of the European Convention on Human Rights achieve the correct balance between allowing States to tackling situations involving a national emergency and ensuring continued protection of human rights? 1. Introduction The international guarantees for the protection of human rights are of special importance in times of war or national emergencies, as it is precisely then that States will be most likely to deviate from the standards of human rights that would be accepted in times of peace. There are clear reasons why, to give an example, States may require that the period of time for which a person is detained is extended. The interpretation of whether the measures taken were justified at the time and whether the steps taken were 'strictly' necessary and whether a national emergency even exists need to be scrutinised closely by the Courts when overseeing States who have derogated from certain Convention rights. To answer the above question it is necessary to look both at the precise wording of Article 15 and at the way in which that Article is applied by the European Court of Human Rights. ...read more.

The latter of which States that "Everyone shall have the right to freedom of thought, conscience and religion". Article 11 is less significant and States that "No one shall be imprisoned merely on the ground of inability to fulfil a contractual obligation". The ICCPR also States in Article 4(1) that derogations must "not involve discrimination solely on the ground of race, colour, sex, language, religion or social origin". The stipulations in Art. 15 ECHR and Art. 53 ECHR, referred to above, mean that when derogating from the ECHR, States are still required to act in accordance with the ICCPR and other international treaties including the Geneva Conventions. Contracting Parties to the ECHR which are also party to the ICCPR and the Geneva Conventions may therefore not derogate from the right to freedom of religion, or the right not to be imprisoned for civil debts, and may not discriminate in the application of their derogating measures, even though these latter restrictions are not, as such, contained explicitly in the Convention. 3. Application of Art. 15 in practice The Court is very cautious in applying Art. 15; it gives a wide "margin of appreciation" to States. ...read more.

Interestingly, it would appear from the text of Article 15 that the Courts will be strict on the States that derogate from the derogable Articles of the ECHR, particularly when the term 'national emergency' appears to have a very different now than it perhaps did after the Convention was created (i.e. post World-War II Europe), where one of the main priorities was to prevent the atrocities that occurred during a full-scale world-war. There is therefore a conflict between the apparently strict text of the Article and the reluctance that the Court has shown to interfere with States decisions about the existence of, and measures required in order to deal with national emergencies. This is seen by the Courts tendency to rule in favour of the States, as was the case in Lawless v. Ireland5: "Adopting, as it must, this approach, the Court accepts that the limits of the margin of appreciation left to the Contracting States by Article 15 para 1 (art 15-1) were not overstepped by the United Kingdom...". This serves to highlight, as I hope this essay has done, that perhaps a correct balance is not in fact achieved in practise by Article 15 and that in situations involving national emergencies, the protection and enforcement of human rights is potentially vulnerable to say the least. ...read more.

Very well written, and focused. But perhaps a little too descriptive.