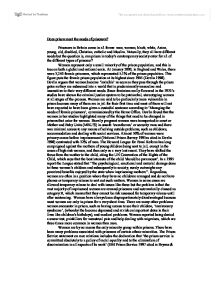 Does prison meet the needs of prisoners?

Does prison meet the needs of prisoners? Prisoners in Britain come in all forms: men, women, black, white, Asian, young, old, disabled, Christian, catholic and Muslim. Naturally, they all have different needs but the question is, can prison in today's contemporary society cater for all of the different types of prisoner? Women represent only a small minority of the prison population, and this is true on both a global and national scale. At January 2000, in England and Wales, there were 3,240 female prisoners, which represented 5.1% of the prison population. This figure puts the female prison population at its highest since 1905 (Devlin 1998). Devlin argues that women become 'invisible' as soon as they pass through the prison gates as they are subsumed into a world that is predominantly masculine and insensitive to their very different needs. Since feminism really flowered in the 1970's studies have shown the criminal justice system to be patriarchal, stereotyping women at all stages of the process. Women are said to be particularly more vulnerable in prison because many of them are in jail for their first time and most of them will not have expected to have been given a custodial sentence according to 'Managing the needs of female prisoners', commissioned by the Home Office. Devlin found that the women in her studies highlighted many of the things that need to be changed in prisons that cater for women. ...read more.

The RRLO has an especially important role to play as a link between prisoners, staff and the Race Relations Management Team (RRMT). He/she should act as a source of information to both prisoners and staff and be prepared, where necessary to discuss complaints of a racially sensitive nature with prisoners. There has been considerable debate about whether black and white offenders experience imprisonment in different ways. The experience of confinement will be conditioned by the levels of solidarity among different ethnic groups, their subcultural backgrounds and the power relations within the prison itself, involving not only interpersonal relations and systems of control but also the design and management of the prison. The internal power relations among prisoners will affect the distribution of work, for forms of interpersonal support and the experience of bullying and intimidation (Bryan & Jones 2001). Non-nationals feel the pains of imprisonment most acutely. This is often a result of problems of language, the lack of information, isolation from family and friends, and in particularly the uncertainty which is associated with knowing little about the operation of the criminal justice system and as a consequence being unsure about procedures and the length of time involved for cases to be heard and decided. Foreign nationals are less likely to be given bail and may not be eligible for home release or benefit from early release policies. ...read more.

come in for only four hours a week, though Pentecostal prisoners formed the largest group due to the popularity of this faith with the high percentage of black women held in that prison (Devlin 1998). In a society like ours, in an age like ours it would have to be argued that prison is failing the needs and rights of certain prisoners. Due to the secularisation process, there are many different types of religion and due to the ethnic backgrounds represented by prisoners, there are many prisoners with different religious beliefs. In a multi cultural society such as the one in which we live, every prisoner is going to vary and have different needs. It is the role of HM Prison Service to meet these needs. Life-sentence prisoners will have different needs to those with short sentences; pregnant women will have different needs to Asian prisoners and disabled prisoners will have different needs to young offenders. Naturally, every need can not and will not be catered for but it is the job of the service to find out and provide for the most fundamental needs, such as provision of nappies, a minister from the correct religious faith, education and perhaps, a special diet. It has been demonstrated that the prison service is not meeting the needs of prisoners in prisons today but there is also evidence that shows that they are trying to cater for the needs of the majority with the funding that they receive. ...read more.