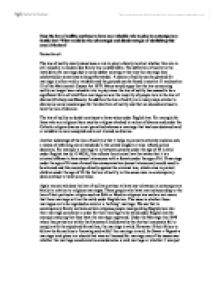 Does the law of nullity continue to have any valuable role to play in contemporary family law? What would be the advantages and disadvantages of abolishing this area of the law?

Does the law of nullity continue to have any valuable role to play in contemporary family law? What would be the advantages and disadvantages of abolishing this area of the law? Nerisa Jarrett The law of nullity clearly does have a role to play in family law but whether this role is still valuable in modern day family law is debateable. The definition of nullity is the invalidity of a marriage due to some defect existing at the time the marriage was celebrated (or sometimes arising afterwards). A decree of nullity can be granted if a marriage is either void or voidable and the grounds can be found in section 11 and section 12 of the Matrimonial Causes Act 1973. Many would argue that the law concerning nullity no longer has a valuable role to play since the law of nullity has ceased to be a significant form of relief from marriage as now the majority of people turn to the law of divorce (Cretney and Mason). In addition the law of nullity is in many ways similar to divorce so some would argue for the abolition of nullity and that we should continue to have the law of divorce. The law of nullity no doubt continues to have value under English law. For example for those who are religious there may be a stigma attached to notion of divorce and under the Catholic religion divorce ...read more.

In view of the criticisms that had been levelled against the anomalous nature of the voidable marriage, the Law Commission examined the question whether the concept should be abolished altogether and the grounds for annulling a voidable marriage included amongst the facts from which irretrievable breakdown of marriage might be inferred as the ground for divorce. They rejected the proposal for three reasons. First, certain Christian denominations and their members draw a clear distinction between annulment and the dissolution of marriage and would be offended if the distinction where blurred. Secondly, some people associating divorce with stigma preferred to keep matters involving no moral blame such as impotence and mental disorder as grounds for nullity. (But this overlooks the fact that moral blame attaches to some of the grounds for nullity e.g. pregnancy.) Thirdly, the bar, which then applied to divorce, applied to divorce within the first year of marriage was clearly inappropriate to the grounds for nullity (Bromley). Thus in concluding, it is this writers opinion that the law of nullity no longer has huge significant value in contemporary family. The law of nullity in many respects it is identical to the law of divorce and thus appears to have lost its value, yet it would be inappropriate to abolish it completely without replacing it with a more comprehensive system that covers the grounds not available under the law of divorce. Or reform the law of divorce to include the grounds for nullity and remove the one-year bar before a petition can be made. ...read more.