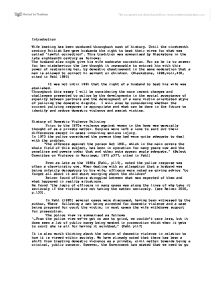 Introduction Wife beating has been condoned throughout most of history. Until the nineteenth century British Law gave husbands the right to beat their wives for what was called 'lawful correction'. This tradition was summarised by Blackstone in the late eighteenth century as follows: The husband also might give his wife moderate correction. For as he is to answer for her misbehaviour the law thought it reasonable to entrust him with this power of restraining her, by domestic chastisement in the same moderation that a man is allowed to correct hi servant or children. (Blackstone, 1996,vol1,432, cited in Pahl 1985) It was not until 1891 that the right of a husband to beat his wife was abolished. Throughout this essay I will be considering the more recent changes and challenges presented to police by the developments in the social acceptance of equality between partners and the development of a more victim orientated style of policing the domestic dispute. I will also be considering whether the current policing response is appropriate and what can be done in the future to identify and reduce domestic violence and assist victims. History of Domestic Violence Policing Prior to the 1970s violence against women in the home was generally thought of as a private matter. ...read more.

A concern of victims was if he gets arrested what will happen to the family income. What about the mortgage and other bills. It is a fact that many men are still the main wage earner in a family and should the wages be lost what will happen to the family home etc. An example of this is expressed by concerns that question the appropriateness and effectiveness of a positive arrest policy in domestic violence incidents. In particular, it is questioned as to whether arresting assailants actually reduces the violence that the victim faces. Levi (1997) points to evidence to suggest that far from reducing the violence, arrests can lead to an increase in the rate of recidivism amongst certain social groupings. Waddington (1999a) supports this with reference to Hoyle (1998) who argues that women tend to want nothing more than an immediate break from the violence and give a warning to their partners. Consequently, Hoyle (1998) suggests that making arrests could stop women from calling the police because they feel that the action they take goes too far. Recognising signs of domestic violence. The police traditionally deal with what they are called to or are informed of. ...read more.

As Hoyle states they may want their partner removed for a short time but do they want the family investigated in a child protection arena? Probably not. However with definitions of child cruelty including 'emotional harm or neglect' it is natural for the police to consider this in any thorough investigation. Conclusion This is a real dilemma in the policing of domestic violence, between concerns for the victim and a desire to arrest the offender. It is important to remember that the logic behind a positive arrest policy was initially based upon the interests of the victim. However it is important also to consider the views of the victim. What is the history of the offender? Is the incident leading to the arrest the peak of the behaviour and reporting to the police the start of reconciliation that would be eliminated by a charge and conviction? It could be argued that the driving force behind domestic violence policies has become societal, rather than victim, concerns (i.e. D.V. is unacceptable in itself, not because of its victims). Whatever the decision, in any case, what is certain is that a support mechanism needs to be in place to prevent recurrence of the violence to enable victims and their families to live safely. David Withers March 2003 ?? ?? ?? ?? 1 ...read more.