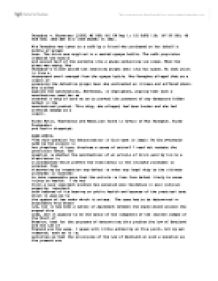 Donoghue v. Stevenson [1932] AC 562; All ER Rep 1; 101 LJPC 119; 147 LT 281; 48 TLR 494; 1932 SLT 317; 1932 SC(HL) 31 (HL). Mrs Donoghue was taken to a caf� by a friend who purchased on her behalf a bottle of ginger beer. The drink was supplied in a sealed opaque bottle. The caf� proprietor unsealed the bottle and poured half of the contents into a glass containing ice cream. When the glass was empty, Mrs Donoghue's friend poured the remaining ginger beer into her glass. At that point in time a decomposed snail emerged from the opaque bottle. Mrs Donoghue alleged that as a result of consuming the defective ginger beer she contracted an illness and suffered shock. She claimed against the manufacturer, Stevenson, in negligence, arguing that such a manufacturer owed her as consumer a duty of care so as to prevent the presence of any dangerous hidden defect in the manufactured product. This duty, she alleged, had been broken and she had suffered damage as a result. Lords Atkin, Thankerton and Macmillan found in favour of Mrs Donoghue. Lords Buckmaster and Tomlin dissented. LORD ATKIN: "The sole question for determination in this case is legal: Do the averments made by the pursuer in her pleading, if true, disclose a cause of action? I need not restate the particular facts. The question is whether the manufacturer of an article of drink sold by him to a distributor in circumstances which prevent the distributor or the ultimate purchaser or consumer from discovering by inspection any defect is under any legal duty to the ultimate purchaser or consumer to take reasonable care that the article is free from defect likely to cause injury to health. I do not think a more important problem has occupied your Lordships in your judicial capacity, important both because of its bearing on public health and because of the practical test which it applies to the system of law under which it arises. ...read more.

The same view was adopted by the Exchequer Chamber, the user by the plaintiff being treated by the court as one of the acts contemplated by the fraudulent defendant. It is unnecessary to consider whether the proposition can be supported in its widest form. It is sufficient to say that the case was based, as I think, in the pleading, and certainly in the judgment, on the ground of fraud, and it appears to add nothing of value positively or negatively to the present discussion. Winterbottom v. Wright (1842) 10 M&W 109; 11 LJ Exch 415; 152 ER 402 was a case decided on a demurrer. The plaintiff had demurred to two of the pleas as to which there was no decision by the court, but on the hearing of the plaintiff's demurrer the court, in accordance with the practice of the day, were entitled to consider the whole record, including the declaration, and, owing to the conclusion that this declaration disclosed no cause of action, gave judgment for the defendant: see Sutton's Personal Actions At Common Law, p.113. The advantage of the procedure is that we are in a position to know the precise issue at law which arose for determination. The declaration was in case and alleged that the defendant had contracted with the Postmaster-General to provide the mail coach to convey mails from Hartford to Holyhead and to keep the mails in safe condition, that Atkinson and others, with notice of the said contract, had contracted with the Postmaster-General to I convey the road mail from Hartford to Holyhead, and that the plaintiff, relying on the said first contract, hired himself to Atkinson to drive the mail coach, but that the defendant so negligently conducted himself and so utterly disregarded his aforesaid contract that, the defendant having the means of knowing and well knowing all the aforesaid premises, the mail coach, being in a dangerous condition owing to certain latent defects and to no other cause, gave way, whereby, the plaintiff was thrown from his seat and injured. ...read more.

The mouse had emerged from the ginger-beer bottle in the United States before it appeared in Scotland, but there it brought a liability upon the manufacturer. I must not in this long judgment do more than refer to the illuminating judgment of Cardozo J in McPherson v. Buick Motor Co, 217 NY 382 (1916), in the New York Court of Appeals, in which he states the principles of the law as I should desire to state them and reviews the authorities in states other than his own. Whether the principle which he affirms would apply to the particular facts of that case in this country would be a question for considemtion if the case arose. It might be that the course of business, by giving opportunities of examination to the immediate purchaser or otherwise, prevented the relation between manufacturer and the user of the car from being so close as to create a duty. But the American decision would undoubtedly lead to a decision in favour of the pursuer in the present case. If your Lordships accept the view that the appellant's pleading discloses a relevant cause of action, you will be affirming the proposition that by Scots and English law alike a manufacturer of products which he sells in such a form as to show that he intends them to reach the ultimate consumer in the form in which they left him, with no reasonable possibility of intermediate examination, and with the knowledge that the absence of reasonable care in the preparation or putting up of the products will result in injury to the consumer's life or property, owes a duty to the consumer to take that reasonable care. It is a proposition that I venture to say no one in Scotland or England who was not a lawyer would for one moment doubt. It will be an advantage to make it clear that the law in this matter, as in most others, is in accordance with sound common aense. I think that this appeal should be allowed." Ref: Normal.dot/ 12 ?R.W.Craig 21/12/2005 ...read more.