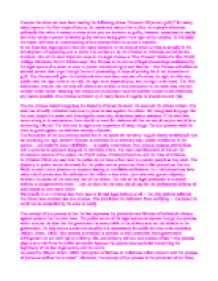 Due Process in the American Legal System.

It seems that since we have been hearing the following phrase "innocent till proven guilty" for many, many years on the front steps of courts, the media and many other outlets. As a people whom are politically free when it comes to crime either you are innocent or guilty, however, sometimes in media and other circles a person is labeled guilty without being given their right of due process. In this paper the reader will have an understanding of due process from the author's research. In the American legal system there are many elements to the steps of when a crime is actually in the development of happening and to where it is carried out by the criminal or criminals and all parties involved. One of the most important steps in the legal process is "Due Process" Webster's New World College Dictionary Fourth Edition says: Due Process is the course of legal proceedings established by the legal system of a nation or state to protect individual rights and liberties." Due Process will allow an accused person time to go through the court proceeding, in hope of proving his or her innocence or guilt. Due Process will give the individuals who have been accused of a crime the right to a fair and public trial, the right to be at the trial, the right to an impartial jury, and the right to be heard. ...read more.

All citizens of the United States have various liberty interest and due process of liberty restrict the government from taking this liberty interest from us without due process of law. Additionally, the government must take appropriate legal procedures before attempting to take an individual property. The United States legal system is an adversarial system, which exercise the idea that any accused individual must be considered innocent until proven guilty. (Silbert, Joannou, 2006) the very premise of our adversary system of the criminal justice is that both the defense attorney and the prosecutor will work to extreme length to make sure that the guilty is convicted and the innocent go free. The main purpose of due process is to show a person that the law expresses the fairness against the power of the state. The public nature of the legal system is shown through due process, which ensures the idea that the government is responsible, not that person. To help ensure justice and equality it is recommended that public scrutiny is necessary (Merver, Grant 2003). Due process is intended to provide people with protection from government when it comes to our civil rights to liberty, life, and property without due process of law it would be very easy from to get in trouble for something they have not even done. Due process has a very big role when it comes to the public perception mainly because the systems seem fair concerning the legitimacy of the law, legal actors, and the courts. ...read more.

If the accused person is found not guilty by the jury, he or she will be able to return back into society as a free person. The due process model recognizes the disparity of power between the state and the private citizen. We recognized long ago that the state, regardless of how much power it holds and investigative resources, that they are not perfect and sometimes makes mistakes too. If the state was never wrong in its accusations, there would no need for trials and all that we would require would be a sentencing tribunal. The due process system is there to guard against the arbitrary exercise of power. The foundation of the due process system lies in the desire for certainty. If power is exercised in an arbitrary way, public confidence in the system and belief in state infallibility is rapidly undermined. The disparity in power cannot be erased but the police can be prevented from unfair procedures that are likely to lead to more pressure on suspects leading to unreliable confessions. These procedures have many inbuilt protections for defendants that reflect a time when there was even greater disparity between the power of the state and that of the citizen. The role of the legal profession in criminal defense is comparatively recent and the idea that the state should pay for the professional defense of poor people is even more recent. Historically in our criminal law there was no formal legal defense at all the only defense afforded the citizen was common law due process. Reference: Merver, Grant.2003, http://www.lectlaw.com ...read more.