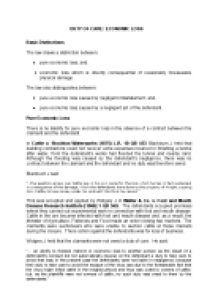 ﻿DUTY OF CARE: ECONOMIC LOSS Basic Distinctions The law draws a distinction between: 1. pure economic loss; and, 1. economic loss which is directly consequential of reasonably foreseeable physical damage. The law also distinguishes between: 1. pure economic loss caused by negligent misstatement; and, 1. pure economic loss caused by a negligent act of the defendant. Pure Economic Loss There is no liability for pure economic loss in the absence of a contract between the claimant and the defendant. In Cattle v. Stockton Waterworks (1875) L.R. 10 QB 453 Blackburn J held that building contractors could not recover extra expenses incurred in finishing a tunnel after water, from the defendant?s works had flooded the tunnel and nearby land. Although the flooding was caused by the defendant?s negligence, there was no contract between the claimant and the defendant and no duty was therefore owed. Blackburn J said ??the question arises, can Cattle sue in his own name for the loss which he has in fact sustained, in consequence of the damage, which the defendants have done to the property of Knight, causing him, Cattle, to lose money under his contract? We think he cannot.? This was accepted and applied by Widgery J in Weller & Co. v. Foot and Mouth Disease Research Institute [1966] 1 QB 569. ...read more.

We may not be able to draw the line with precision, but we can always say on which side of it any particular case falls … Where, again, is the line to be drawn? Only where “in the particular case the good sense of the judge decides.”” This was applied by the Court of Appeal in Spartan Steel & Alloys Ltd v. Martin & Co. (Contractors) Ltd [1973] 1 QB 27. The defendants’ employees were digging up a road when they negligently damaged an electric cable. The defendants knew that this was the direct supply from the power station to the claimants’ factory. The claimants were without electricity until the Electricity Board was able to repair the cable and, immediately the power supply failed, they had to pour molten metal out of their furnace to prevent the metal solidifying and damaging it. As the claimants could not keep the metal at the correct temperature and complete the “melt”, the metal depreciated in value by £368 and they lost a profit from the sale of the metal from that melt of £400. They could also have completed four further melts during the power cut and their loss of profit from those melts was £1,767. In an action for negligence against the defendants, the claimants claimed all three sums as damages, a total of £2,535. ...read more.

Church Commissioners for England and Wales [1988] 2 All ER 992. The Hyde Park Property Development Co. Ltd, which went into liquidation in October 1980, employed Wates Ltd to build a block of flats in West London. Wates Ltd employed a sub contractor to do the plastering work in the flats. The plastering work was carried out negligently. The block of flats was sold to the Church Commissioners. The Church Commissioners leased one of the flats to D & F Estates, who let the flat to Mr and Mrs Tillman. Fifteen years after the flats were built, the plaster began to come away from the walls. The claimants sued the church Commissioners and Wates Ltd. Here action failed in the House of Lords. Lord Bridge said: ?If a builder erects a structure containing a latent defect which is dangerous to persons or property, he will be liable in tort for injury to persons or damage to property resulting from that dangerous defect. But if the defect becomes apparent before any injury or damage has been caused, the loss sustained by the building owner is purely economic. The loss can be recovered if it flows from breach of a relevant contractual duty, but in the absence of a special relationship of proximity it is not recoverable in tort.? ...read more.