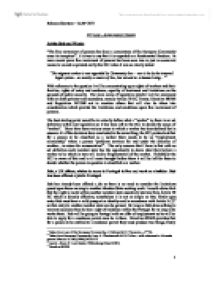 EC LAW ~ ASSIGNMENT THREE Advise Bob and Wendy "The free movement of persons has been a cornerstone of the European Community since its inception"1, it is true to say that it is regarded as a fundamental freedom. In more recent years free movement of persons has been seen less as just an economic means to an end as pointed out by the ECJ when it was so clearly stated: "The migrant worker is not regarded by Community law - nor is he by the internal legal system - as merely a source of law, but viewed as a human being..."2 With reference to the question I will be concentrating upon rights of workers and their families, rights of entry and residence, equality of treatment and limitations on the grounds of public security. The main areas of legislation which I will be concerned with are both primary and secondary, namely Article 39 EC Treaty, Directive 68/360 and Regulation 1612/68 not to mention others that will also be taken into consideration which provide the limitations and conditions upon free movement of persons. The best starting point would be to actually define what a "worker" is; there is no set definition within any legislation so it has been left to the ECJ to decide the scope of "worker". ...read more.

The ECJ has described a social advantage as one which may or may not be "linked with the contract of employment" but is generally "granted to national workers...because of their objective status as workers or by virtue of the mere fact of their residence on the national territory and the extension of which to workers who are nationals of other Member States therefore seems suitable to facilitate their mobility"11. Due to the fact that there are no cases which I could find of a similar nature with regards to pension schemes and based upon the reasoning above Bob should be entitled to be part of such a scheme because of his status as a worker and it should be seen as an extension of the entitlement for national workers. It must be noted however that the pension scheme is not one set up directly by the Member State to benefit all workers so it will be left for the ECJ to decide. If the ECJ did hold that a pension scheme did fall under the heading of social and tax advantage then my advice to Bob would be that he should entitled to be part of such a scheme and is not allowed to be discriminated against merely due to his nationality. ...read more.