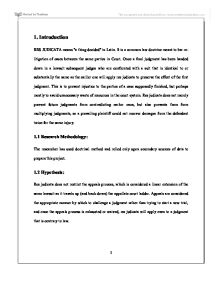 Elucidate Doctrine of Res Judicata in the Light of Decided Cases

The doctrine of res judicata is based on three maxims (a) Nemo debet lis vaxari pro eadem causa (no man should be vexed twice for the same cause) (b) Interest republicae ut sit finis litium ( it is in the interest of the state that there should be an end to a litigation); and (c) Re judicata pro veritate occipitur (a judicial decision must be accepted as correct) As observed by Sir Lawrence Jenkins, the rule of res judicata, while founded on account of precedent, is dictated by a wisdom is for all times. Referring to the opinion of the Judges expressed in 1776 in the Duches of Kingston's Case2 to which reference has been invariably made in most of the cases by the Indian courts. It was said in that case: "From the variety of cases relative to judgments being given in evidence in civil suits, these two deductions seem to follow as generally true : first the judgment of a Court of concurrent jurisdiction, directly upon the points, is as a plea, a bar, or as evidence conclusive, between the same parties, upon the same matter, directly in question in another Court; secondly that the judgment of a Court of exclusive jurisdiction, directly upon the point, is, in like manner, conclusive upon the same matter, between the same parties, coming incidentally in question in another Court, for a different purpose. But neither the judgment of a concurrent or exclusive jurisdiction is evidence of any matter which came collaterally in question, though within their jurisdiction, nor of any matter incidentally cognizable, nor of any matter to be inferred by argument from the judgment." Thus, this doctrine of res judicata is a fundamental concept based on public policy and private interest. ...read more.

To the same effect, the judgment of this court in the case of Sulochana Amma vs. Narayanan Nair, 9 in which it has been held that the issue between the same parties or persons under whom they claim title or litigating under the same title, it operates as a res-judicata. A plea decided even in suit for injunction touching the title between the same parties, would operate as res judicata. 4. Conclusion The doctrine of res judicata prevents a litigant from getting yet another day in court after the first lawsuit is concluded by giving a different reason than he gave in the first for recovery of damages for the same invasion of his right. The rule provides that when a court of competent jurisdiction has entered a final judgment on the merits of a cause of action, the parties to the suit and their privies are bound "not only as to every matter which was offered and received to sustain or defeat the claim or demand, but as to any other admissible matter which might have been offered for that purpose." A final judgment on the merits bars further claims by the same parties based on the same cause of action. Res judicata prevents a plaintiff from suing on a claim that already has been decided and also prevents a defendant from raising any new defense to defeat the enforcement of an earlier judgment. It also precludes relitigation of any issue, regardless of whether the second action is on the same claim as the first one, if that particular issue actually was contested and decided in the first action. Former adjudication is an analogue of the criminal law concept of double jeopardy. ...read more.