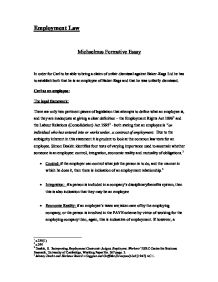 Employee Status - In order for Carl to be able to bring a claim of unfair dismissal against Baker-Rags Ltd he has to establish both that he is an employee of Baker-Rags and that he was unfairly dismissed.

Employment Law Michaelmas Formative Essay In order for Carl to be able to bring a claim of unfair dismissal against Baker-Rags Ltd he has to establish both that he is an employee of Baker-Rags and that he was unfairly dismissed. Carl as an employee: The legal framework: There are only two pertinent pieces of legislation that attempts to define what an employee is, and they are inadequate at giving a clear definition - the Employment Rights Act 19961 and the Labour Relations (Consolidation) Act 19922 - both stating that an employee is "an individual who has entered into or works under...a contract of employment. Due to the ambiguity inherent in this statement it is prudent to look at the common law tests for an employee. Simon Deakin identifies four tests of varying importance used to ascertain whether someone is an employee: control, integration, economic reality and mutuality of obligations.3 * Control: if the employer can control what job the person is to do, and the manner in which he does it, then there is indication of an employment relationship.4 * Integration: if a person is included in a company's disciplinary/benefits system, then this is also indication that they may be an employee * Economic Reality: if an employee's taxes are taken care of by the employing company, or the person is involved in the PAYE scheme by virtue of working for the employing company then, again, this is indicative of employment. ...read more.

* Mutuality of Obligations: There is a prima facie issue with establishing mutuality of obligations because Carl's service contract only runs for certain times during the year, however, for the purpose of demonstrating Carl is an employee at the point his contract is terminated then all that needs to be shown is that there was mutuality of obligations when the contract was terminated - as a service contract was in place there was an obligation for Carl to perform the work outlined in the contract, and there was an obligation for Baker - Rags to ensure that work was there. Other tests of employment status: * Control: There is a clear level of control over Carl, as not only is he being told what time he has to work and what work to do, but he is being instructed in how to perform the work - being set time limits on when the work is to be completed for example. * Integration: the warnings and disciplining of Carl by Baker-Rags demonstrates that there is at least a certain level of integration due to his being subject to the disciplinary system. * Economic Reality: Although Carl is paid by Baker-Rags, they do not administer his tax and National Insurance contributions, which would suggest a non employee. His situation with regards to uniform and equipment would also suggest a non employee were it not for fact that they have started purchasing uniform for him. ...read more.

months at a time, so it would be argued by Baker-Rags that he does not qualify by virtue of s.108, however a continuity of employment may be found that demonstrates that Carl has been employed for three years, since he worked for Baker - Rags through Data Analysts Ltd. In Cornwall CC v Prater15 it was established that the use of s.212 of the ERA could be used to unify seemingly separate employment contracts into a single continuous employment as long as each individual service contract could be shown to be an employment contract. There is mutuality of obligations for each ten month service contract, so it is submitted that they are employment contracts, and the two month gaps are merely a temporary cessation of work,16 therefore Carl was indeed employed for over one year when his contract was terminated. The reason: Although it is for the employer to state what the reason was for the dismissal it is assumed that it was because of the economic downturn. Fair grounds: The fair grounds for dismissal are found under s.98 of the ERA 1996. An economic downturn is not one of the listed fair reasons for dismissal, however it may be argued by Baker - Rags that it was some other substantial reason,17 the economic downturn, however that doesn't justify the dismissal of Carl holding the position he held. It is therefore submitted that Carl has grounds for a claim of unfair dismissal. ...read more.