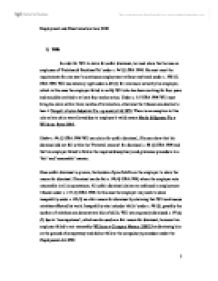 1) Will: In order for Will to claim for unfair dismissal, he must show that he was an employee of 'Feckless & Reckless Plc' under s. 94 (1) ERA 1996. He must meet the requirements for one year's continuous employment without any break under s. 108 (1) ERA 1996. Will has statutory right under s. 86 (1) for minimum notice by his employer, which in this case the employer failed to notify Will who has been working for four years and would be entitled to at least four weeks notice. Under s. 111 ERA 1996 Will must bring his claim within three months of termination, otherwise the tribunal can decline to hear it Norgett v Luton Industrial Co- op society Ltd 1976. There is an exception to this rule as late claim was allowed due to employee's valid reason Marks & Spencer Plc v Williams- Ryan 2005. Under s. 94 (1) ERA 1996 Will can claim for unfair dismissal, if he can show that his dismissal did not fall within the 'Potential reasons' for dismissal s. 98 (2) ERA 1996 and that his employer failed to follow the required disciplinary and grievance procedure in a 'fair' and 'reasonable' manner. Once unfair dismissal is proven, the burden of proof shifts on the employer to show the reason for dismissal. ...read more.

John: Johan is clearly dismissed on 'Redundancy grounds' under s. 139 (1) (b) as IQ decided that one of their designers has to go due to recession. John can claim for redundancy dismissal payment only if it can be proven that he is qualified for the redundancy payment. In order for John to qualify, he must first show that he was an employee under 135 ERA 1996, however it is for the tribunal to decide if a person is an employee by considering the facts and concluding that there is a genuine contractual relationship of employer/ employee as in the case Secretary of state v Bottrill (1999). There is a requirement for continuous employment for at least two years s.155 ERA 1996. He must not be under the age of twenty or past the age of retirement for the job. John's claim will be invalid if the dismissal was due to 'gross misconduct' or if he was offered alternative job and he refused without a valid reason. Once all the above requirements are meet, it is important for Johan to bring his claim within six month to the employment tribunal under s. 164 (1) ERA 1996 due to him not being able to extend the period. Redundancy is a fair reason for dismissal but not in every situation such as being made redundant due to maternity, being a member of trade union, the dismissal will automatically be made unfair Langston v Cranfield University [19987]. ...read more.

Once the employer has been made aware that the employee is struggling, they must investigate the problem and find a solution to the problem, which clearly the employer failed to do so in Lillian's case. Offering counseling advice is unlikely to be breach of duty to employee as stated in Hatton v Sutherland. However in court of appeal it was held that provision of such services will not correct a breach of duty of care. Looking at Lillian's case there is no indication that any sort if service was provided to her. Overall test is the conduct of the 'reasonable & prudent employer' taking reasonable care of his employees in the height of what he knows or ought to know Barber v Somerset County Council (H.O.L). It can be argued that Lillian's case is similar to Intel corporation v Daw 1976 in which the court of appeal upheld the decision of high court in 2006 that employer is negligent due to failure to reduce workload of stressed employee and awarded over 134,000 in damages. Lillian can claim for damages and has the right to statutory sick pay, however she must working for an employer under a contract of service. She can receive at least 90 pound a week on average. Lillian will also be able to resign from her position and claim constructive dismissal. ...read more.