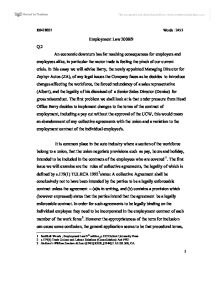 Employment Law 2008/9 Q.2 An economic downturn has far reaching consequences for employers and employees alike, in particular the motor trade is feeling the pinch of our current crisis. In this essay we will advise Barry, the newly appointed Managing Director for Zephyr Autos (ZA), of any legal issues the Company faces as he decides to introduce changes affecting the workforce, the forced redundancy of a sales representative (Albert), and the legality of his dismissal of a Senior Sales Director (Denise) for gross misconduct. The first problem we shall look at is that under pressure from Head Office Barry decides to implement changes to the terms of the contract of employment, including a pay cut without the approval of the UCW, this would mean an abandonment of any collective agreements with the union and a variation to the employment contract of the individual employee's. It is common place in the auto industry where a section of the workforce belong to a union, that the union negotiate provisions such as pay, hours and holiday, intended to be included in the contracts of the employees who are covered1. The first issue we will examine are the rules of collective agreements, the legality of which is defined by s.179(1) TULRCA 19922states: A collective Agreement shall be conclusively not to have been intended by the parties to be a legally enforceable contract unless the agreement - (a)is in writing, and (b) ...read more.

This leaves the only practical remedy open to the court as an award of damages, a wrongfully dismissed employee is entitled to damages equal to his wages or salary during his notice period19, as for damages under other headings such as loss of reputation or stigma, the courts are reluctant to agree to such awards as was seen in Addis V Gramophone Co Ltd20, however an altering of this position came about in Malik v BCCI SA21 where the employee could not obtain alternative employment due to the 'stigma' associated with his employment at BCCI. The most obvious distinction between cases of wrongful and unfair dismissal is that the former is decided in the civil courts and the later in a tribunal. In order for an employee to bring an action for unfair dismissal22, they must first ensure they meet the qualifying criteria; they must be an employee, have been continuously employed for one year or more23, not be employed by the police or armed forces, and be employed in Great Britain. The statutory protection afforded to an employee once they qualify to bring a case is potentially a "more powerful way of challenging bad employer practices"24. As we have shown an action brought for wrongful dismissal is based on the grounds of breach of contract, whereas an action for unfair dismissal gives the employee an opportunity to actually challenge the fairness of the decision to dismiss. ...read more.

This being said Denise could still bring an action for wrongful dismissal, and claim a repudiatory breach for not receiving the required notice period. In order to survive a claim for breach Zephyr Autos would have to show that they had fair and reasonable grounds for the gross misconduct. The legal issues Barry now faces as the Managing Director of Zephyr Auto's are as follows. In relation to the reduction of pay ZA could face unfair dismissal claims on the grounds of constructive dismissal, unless he provides a statement not later than one month after the change37. In the event that any of the employees refuse to accept the change, Barry would then have the option to dismiss and pay the required statutory notice period. As we have shown the dismissal of Albert on grounds of redundancy, which has a possibility of a claim for unfair dismissal, Barry would be advised to draft a clear document stating the reason for Albert's selection and his unsuitability for employment elsewhere in the group. Barry is legally obliged to pay Albert the statutory redundancy payment under s. 135 ERA 1996. The dismissal of Denise however raises fewer legal issues as she does not have the qualifying minimum of continuity in order to receive the benefit of statutory protection, in order to counter a claim of wrongful dismissal for gross misconduct, Barry would be advised to gather all evidence against Denise, in order to substantiate his claim of her misconduct. ...read more.