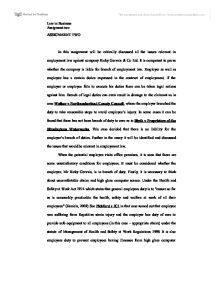 Employment Law Scenario. In this scenario there are many issues that are relevant in employment law. The most responsible person in the organisation is Mr Gervais. As an employer Mr Gervais has many responsibilities, duties and issues to overcome

ASSIGNMENT TWO In this assignment will be critically discussed all the issues relevant in employment law against company Ricky Gervais & Co Ltd. It is competent to prove whether the company is liable for breach of employment law. Employer as well as employee has a certain duties expressed in the contract of employment, if the employer or employee fails to execute his duties there can be taken legal actions against him. Breach of legal duties can even result in damage to the claimant as in case Walker v Northumberland County Council, where the employer breached the duty to take reasonable steps to avoid employee's injury. In some cases it can be found that there has not been breach of duty to care as in Blyth v Proprietors of the Birmingham Waterworks. This case decided that there is no liability for the employer's breach of duties. Further in the essay it will be identified and discussed the issues that would be relevant in employment law. When the potential employee visits office premises, it is seen that there are some unsatisfactory conditions for employees. It must be considered whether the employer, Mr Ricky Gervais, is in breach of duty. Firstly, it is necessary to think about uncomfortable chairs and high glare computer screen. Under the Health and Safety at Work Act 1974 which states that general employers duty is to "ensure so far as is reasonably practicable the health, safety and welfare at work of all their employees" (Daniels, 2008) ...read more.

In the situation if the employer is unaware that the employee behaves unsatisfactory and injures another employee, it will be unlikely that the employer will be liable as in Smith v Crossley Bros . Claimant was apprentice or trainee employed by Defendant. He was seriously injured by two fellow apprentices who played a practical joke on him. Held: not liable as act of wilful misbehaviour which defendants could not have foreseen. (No duty of care). However, in this scenario Mr Gervais is aware of Peters behaviour (as it is stated in scenario that he has told Peters about his behaviour before), therefore the employer is liable under his personal duty, see Hudson v Ridge Manufacturing Co. Claimant injured by a foolish prank played on him by a fellow employee. Employer knew about this and had spoken about his conduct and reprimanded him. Held: employers were liable and had breached their duty of care. Next to look at is Defamation Act 1952. Defamation is defined as "publication of a statement which reflects on person's reputation and tends to lower him" (Rogers, 2002) see Parmiter v Coupland. It is held that reputation was damaged. Also see Berkoff v Burdhill, where the claimant was untruthfully described and the defendant was liable in negligence. It is also breach of implied term in the contract of employment "that any reference would be compiled with reasonable care." ...read more.

see Lim Poh Choo v Camden and Islington Area Health Authority. It was held that the claimant will have to change life style, so the employer is liable in breach of duty in providing health and safety to his employees. In this scenario, Geoff now cannot do his hobby again and also will never be able to drive a car again. In this scenario there are many issues that are relevant in employment law. The most responsible person in the organisation is Mr Gervais. As an employer Mr Gervais has many responsibilities, duties and issues to overcome. In the situation with his employee Geoff it can be proven that Mr Gervais is liable for a breach of contract of employment. Therefore, Geoff can sue his employer for breach of duties and request compensation. It is suggested that Geoff also needs to check if there are available benefits for him, as it is major injury he suffered. All his life now is affected and will change. To conclude, there are various issues relevant to employment law. There are many regulations and acts applied. Most of the issues are connected with Health and Safety at Work Act 1974. Mr Gervais seems to ignore most of the legal requirements in respect to the employment law in his organisation: safe equipment, workplace safety and his employee's safety and health. In order to avoid problems concerning breach of employment law and claims against him, Mr Gervais should start to control work in his company more effectively. ...read more.