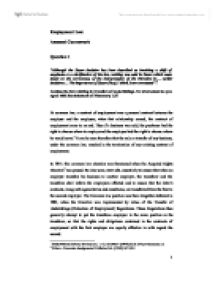 Employment Law Assessed Coursework Question 1 "Although the Suzen decision has been described as involving a shift of emphasis or a clarification of the law, nothing was said in Suzen which casts doubt on the correctness of the interpretation of the Directive in... earlier decisions... The importance of Suzen [has], I think, been overstated".1 Analyse the law relating to transfers of undertakings. To what extent do you agree with the statement of Mummery LJ? At common law, a contract of employment was a personal contract between the employer and the employee; when that relationship ceased, the contract of employment came to an end. Thus if a business was sold, the purchaser had the right to choose whom to employ and the employee had the right to choose whom he would serve.2 It can be seen therefore that the sale or transfer of any business, under the common law, resulted in the termination of any existing contract of employment. In 1977, this common law situation was threatened when the Acquired Rights Directive3 was passed. Its aims were, inter alia, essentially to ensure that when an employer transfers his business to another employer, the transferor and the transferee shall inform the employees affected and to ensure that the latter's contracts, along with agreed terms and conditions, are transferred from the first to the second employer. The Common law position was then altogether defeated in 1981, when the Directive was implemented by virtue of the Transfer of Undertakings (Protection of Employment) Regulations. These Regulations thus generally attempt to put the transferee employer in the same position as the transferor, so that the rights and obligations contained in the contracts of employment with the first employer are equally effective in with regard the second. TUPE has been said to represent a major limitation on both the principles of freedom of contract and the power of employers to arrange their commercial and corporate affairs in such a way as to minimise their employment liabilities.4 Moreover, in this respect, ...read more.

This implies that there is some formal nexus between transferor and transferee, which is mostly lacking on a change over of contractors. However, this analysis has been academically criticised (it is submitted correctly), as being inconsistent with European law. 'The trigger mechanism should be viewed as unimportant from the point of view of protecting employee rights'.18 There does not appear to be any logical grounds for distinguishing between the rights of those who transfer in the initial phase of contracting out, where there will be an identifiable legal nexus and those in the second phase.19 The Court of Appeal ultimately reversed the EAT's decision in Dines and held that the transfer took place in two stages,20 i.e. the handing back of the cleaning services from Initial Healthcare to the Hospital and the re-handing over of the contract to Pall Mall. The cleaning services remained essentially the same, on the same premises and by the same personnel. The court therefore found, (rightly) that this constituted a transfer within the meaning of TUPE. The Court of Appeal's decision had the effect of bringing some certainty to a previously uncertain area of law and furthermore it dispelled the fears of certain Trade Unions that had the EAT's decision stood, second transfer employees were in a significantly more precarious position in respect of employment protection. "...the decisive criterion for establishing whether there is a transfer for the purposes of the Directive is whether the business in question retains its identity...".21 While Dines was waiting to go up to the Court of Appeal, the ECJ delivered its decision in Christel Schmidt22 where the employee was employed as a cleaner in a bank. It was then arranged for the cleaning services to be taken over by another company which already had the contract in respect of other branches. The employee was offered (but refused) employment with the new company as it was at a lower hourly rate. ...read more.

It is undeniable that the European Courts decision represented a major change of approach to the application of the Acquired Rights Directive to the transfer of service undertakings and creates a significant gap in employment protection rights. It seems that it was therefore crucial for a higher English court, as in ECM, to hold that where a contractor in such a case refuses to take on employees it is possible for a tribunal to look at the motive of the contractor in making that decision. And if the motive is bad (in order to get around TUPE) the tribunal can still find that there is a TUPE transfer. Having said that, it can be seen in many of the above cases that the Regulations cannot be excluded by a single factor. Moreover, in Securicor Guarding Ltd.,37 it is significant that the EAT had already recognised, by 1996, that the basic principle of TUPE is that employees should be protected, "...if both tenderers bid on a level playing field, that is one where the terms and conditions of the staff are the same in either case, this provides the necessary protection for the employees, who can have no influence over whether or not the undertaking in which they work changes hands".38 In conclusion, this analysis has necessarily focused on a narrow area of the law of transfers of undertakings; it is nevertheless an important area and one that is likely to receive a fair amount of ongoing attention. The ECM case has, as did Suzen before it, received a fair amount of criticism. Whilst it was well meaning it sits uneasily with European Court case law and thus further adds to the uncertainty.39 Yet not only has ECM been upheld in the Court of Appeal, it has subsequently been followed in Magna Housing Association Ltd.40 Thus irrespective of calls that the case compounds the sheer uncertainty of the application of Suzen in the UK,41 it appears that employee's rights are to be safeguarded for a while longer; at least until the next bizarre anti-protective measure to come out of Europe. ...read more.