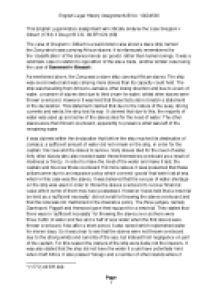 ﻿English Legal History AssignmentUB No: 10004566 This English Legal History assignment will critically analyse the case Gregson v Gilbert (1783) 3 Doug KB 232, 99 ER 629 (KB). The case of Gregson v Gilbert is a well-known case about a slave ship named the Zong which was carrying African slaves. It is infamously remembered for the ?classification? of the slaves merely as ?goods? rather than human beings. It was a landmark case in relation to opposition of the slave trade, another similar case being the case of Somerset v Stewart[1]. As mentioned above, the Zong was a slave ship carrying African slaves. The ship was overcrowded and was carrying more slaves than its capacity could hold. The ship was travelling from Africa to Jamaica. After losing direction and due to a lack of water, a number of slaves died due to their yearn for water, whilst other slaves were thrown overboard. However it was held that these facts did not match a statement in the declaration. This statement claimed that due to the nature of the seas, strong currents and winds, the ship lost its way. It claimed that due to this, the majority of water was used up and some of the slaves died for the need of water. The other slaves were then thrown overboard, apparently to preserve what was left of the remaining water. It was claimed within the declaration that before the ship reached its destination of Jamaica; a sufficient amount of water did not remain on the ship, in order for the captain, his crew and the slaves to survive. Sixty slaves died for the need of water, forty other slaves who also needed water threw themselves overboard as a result of madness or frenzy. In order to make the most of the water and make it last, the captain and his crew threw overboard 150 more slaves. ...read more.

However one cannot deny that slavery still exists in certain parts of the world even in the present day. Question 2 The article by Colin Bobb-Semple, ?English common law, slavery and human rights? (2006-7) 13 Tex. Wesleyan Law Review 659 will now be discussed with particular emphasis on the author?s discussion of the role played by law in establishing, maintaining and eventually ending slavery. This article is based upon the subject of slavery and villeinage within the British colonies and England. It also mentions how the issue of slavery was dealt with via legal processes and the inhumane treatment many African slaves suffered at the hands of foreigners such as Europeans. It describes a number of cases that were believed to have influenced or partly contributed towards the abolition of slavery, including the case of Somerset v Stewart. This case is notably known for the reluctance of Lord Mansfield in coming to his controversial decision. It also mentions the shocking case of the Zong slave ship, legally known as Gregson v Gilbert. The way these cases were dealt with in the English courts is discussed and their role played in leading the way to abolishing slavery. The factors that led to the development of vital modern day statues such as the Human Rights Act 1998 are revealed. A number of British colonies are mentioned within the article, including Guyana and Demerara. The function of English common law and the ruling of it within these colonies during the 18th and 19th century is discussed. The important 2005 case of House of Lords in A & Others v Secretary for the Home Department, again relating to Human rights issues, is discussed and its outcome also outlined. Also discussed are important events and so called ?controversial? figures of the particular time period. These figures and events played a part in influencing slaves to rebel against plantation owners, some to the extent that even led to uprisings like that of Berbice in 1763 by Kofi. ...read more.

The author describes the law as a gradual but ever-changing force that primarily played the role not only to establish but to also maintain and sustain slavery. It is then described the law as a force that later transitioned into the role of abolishing slavery. This, the author claimed was done with the aid of important figures that opposed slavery such as Rev. Smith and Granville Sharp. However even though the author describes the Somerset case as a landmark case for slaves, he states that the decision did not help slaves abroad which it may well have done if the outcome was different and the statement by Lord Mansfield was different. A huge emphasis is put on this case and on the decision of Lord Mansfield. This can be seen even in the conclusion of the article, the author believes that not enough was done by Mansfield in order to protect human lives, and the opportunity to set a precedent which stated the common law was superior to ordinary slave law was not taken. It quotes ?Lord Mansfield and his colleagues, sitting in the highest common law court in England, did not, have the courage to use equitable principles to embellish the common law.? The author also points out that the part played by the English common law should be committed to memory, when he quotes, ?The common law?s ability to protect slaves from torture and inhuman treatment in the colonies is a matter of public record.? One may presume that here the author is stating that people should learn from the slave trade and not let history repeat itself. It is not deniable that slavery still exists in parts of the world today but it is shown by the author that undoubtedly the various acts that were passed in the 19th century to abolish slavery not only led to the freedom of slaves, but also led to and helped shape the basic human rights that are available in today?s society. Page ________________ [1] (1772) 98 ER 499 [2] (1677) 2 Lev 201, 83 ER 518 ...read more.