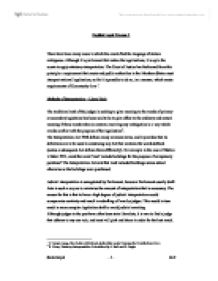 English Legal Process 1 There have been many cases in which the courts find the language of stature ambiguous. Although it is parliament that makes the legalisations, it is up to the courts to apply statutory interpretation. The Court of Justice has fashioned from this principle a requirement that courts and public authorities in the Members States must interpret national legalisation; so far it is possible to do so, in a manner, which meets requirements of Community Law 1. Methods of Interpretation - Literal Rule The traditional task of the judges in seeking to give meaning to the words of primary or secondary legislation has been said to be to give effect to the ordinary and natural meaning if those words taken in context, resolving any ambiguities in a way which avoids conflict with the purpose of the legalisation2. The Interpretation Act 1978 defines many common terms, and it provides that its definitions are to be used in construing any Act that contains the words defined (unless a subsequent Act defines them differently). For example in the case of Hutton v Esher 1973, could the word 'land' include buildings for the purpose of compulsory purchase? ...read more.

produce an inconsistency, or an absurdity or inconvenience so great as to convince the court that the intention could not have been to use them in their ordinary significance"8 Examples of the Golden rule include Sigsworth 1935, Sigsworth murdered his mother and tried to claim his inheritance. There is a rule that no one should profit from his or her wrong, this overruled a clear statutory right of a son to inherit on intestacy. Hence statutes may be modified on grounds of public policy, as one was in this case (the principle was an existing common law principle that would have applied had she had died having made a will). Although this is a clear breach of the rule that clear and unambiguous words cannot be ignored, it surely accorded with Parliament's wishes.9 An advantage of the golden rule is that in prevents the absurdity and injustice caused by the literal rule. It helps the courts put into practice what parliament really means. Disadvantages of the golden rule include what the law commission found. They noted in 1969 that the 'rule' provided no clear meaning of an 'absurd result'. Another disadvantage is that it turns out to be a less explicit for of the mischief rule.10 The mischief rule According to the Law Commission this was the most satisfactory of the 3 rules (and the Golden Rule was condemned). ...read more.