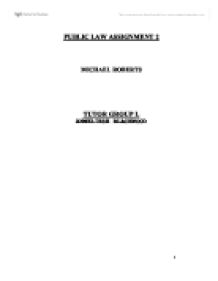 Essay on the function of Judicial Review

PUBLIC LAW ASSIGNMENT 2 MICHAEL ROBERTS TUTOR GROUP L ANNELIESE BLACKWOOD 'The primary purpose of judicial review ... is to keep the powers of government within their legal bounds, so as to protect the citizen against their abuse.' Discuss with reference to the common law grounds of review. Judicial review is a process which is widely recognised to incorporate three functions or purposes. Firstly there is the function whereby citizens of the state who have been wronged and caused grievance by a public authority may be redressed. Secondly there is the 'normative and expository' role which encourages good governance through the promotion of fundamental principles. Finally, as the title statement propounds, there is the control of government element which helps to ensure that the power exerted by parliament and public authorities does not go unchecked, although judicial review is only concerned with the procedural correctness and legitimacy of such power and usually administrative or political checks are present to assess the merits of decisions made1. The most effective way to explore these purposes would be to go through the three common law grounds of judicial review as set out by Diplock LJ in Council of Civil Service Unions v. Minister for the Civil Service [1985] AC 374 (illegality, irrationality and procedural impropriety) plus the effects of the Human Rights Act 1998, the available remedies, and then to consider how the law may develop further in the future. ...read more.

As for the normative and expository element, generally it seems clear that so long as authorities act honestly and reasonably then no decision of theirs would be deemed irrational. So this role is upheld in irrationality although I feel the primary purpose for judicial review on grounds of irrationality is to keep the powers of government within legal bounds. Judicial intervention due to the substance of a decision merely in order to promote good governance does not seem to give the action sufficient justification. The last ground in Lord Diplock's formulation is procedural impropriety. When an authority fails to follow a mandatory procedure (as happened in Bradbury v Enfield LBC (1967)) their decision will be invalid. Also, one who is affected by a decision has a right to a fair hearing - decision-makers must allow for a party to make representations in order to act fairly (Ridge v Baldwin (1964)) and they must also act impartially. Furthermore, reasons for a decision have to be given to the person affected. Failure to do so is likely to result in the decision being invalid (R v Secretary of State for the Home Department, ex parte Doody (1993)). This ground seems to give a little more weight to redressing wronged citizens. While the requirements to give reasons for a decision and to allow a fair hearing do help to keep an authority in check, I think the amjor concern here is fairness to the citizen. ...read more.

It would probably increase the extent to which judicial review serves to public redress grievances by focusing less on the dry procedural grounds of review and onto a more substantive role. As for encouraging principles of good practice, the introduction of a proportionality principle may cloud the percieved boundaries of 'good governance', at least initially as there would be little precedent. However, even if proportionality was introduced the primary purpose of judicial review would remain to be the prevention of governmental abuse. In fact, a proportionality test would increase the amount of control the judiciary exerted over the government which could lead to a radical constitutional shift. Having looked at the grounds under which judicial review arises, the remedies which are available and what may lie ahead for the judicial review procedure, a conclusion can now be drawn. The emergining pattern which seemed to arise during this analysis is that the primary purpose of judicial review is indeed to control the exercise of governmental power and protect citizens from abuse. The normative and expository function of judicial review features in all areas but it tends to come as a beneficial side effect rather than as a purpose. Furthermore whilst the judges recognise that it is important to give citizens routes to appeal decisions and be remedied, this seems to be secondary to purpose of keeping the government under law. ...read more.